A different train coming soon for the Southern...

. . and based on your previous excellent work should be very nice too!

That's is going to be fantastic for Danny's route!

Glad to see you have started up your own workshop thread! :-)

What a lovely surprise,Darwin.......didn't expect this! We do have locos with Night Ferry headboards, but up till now no coaches, so really pleased to see these.

The final livery of a few...

Just one problem, for the final days I can not find the UIC numbers for the Fourgons. Can anyone help?

The never had UIC numbers.

They failed to meet continental regulations from 1960 and were repainted in green, stripped of their Westinghouse brake gear and put into normal service.
Numbers were S1S, S2S and S3S.

I don't know anything about the NORD versions.

Progress update on the LNWR Cauliflower - the loco is now more or less ready for export.
This is in original condition with round top firebox, Ramsbottom safety valves, wooden brake blocks and original buffers: 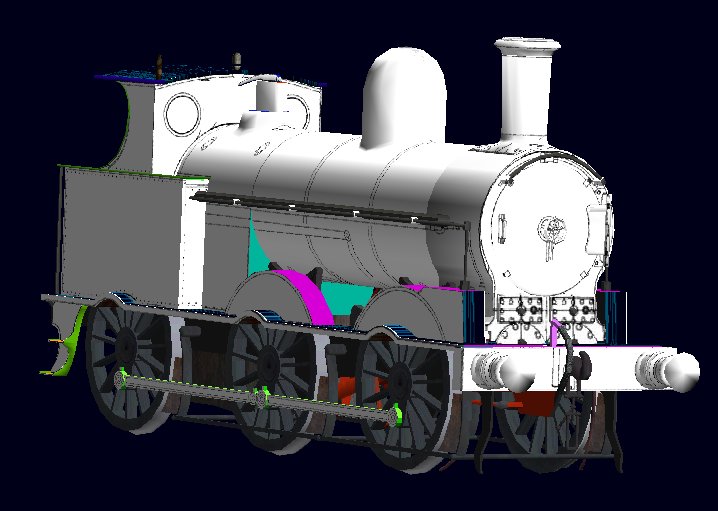 Then as will be for North Staffs - with Belpaire firebox, Ross pop safety valves and later style buffers: 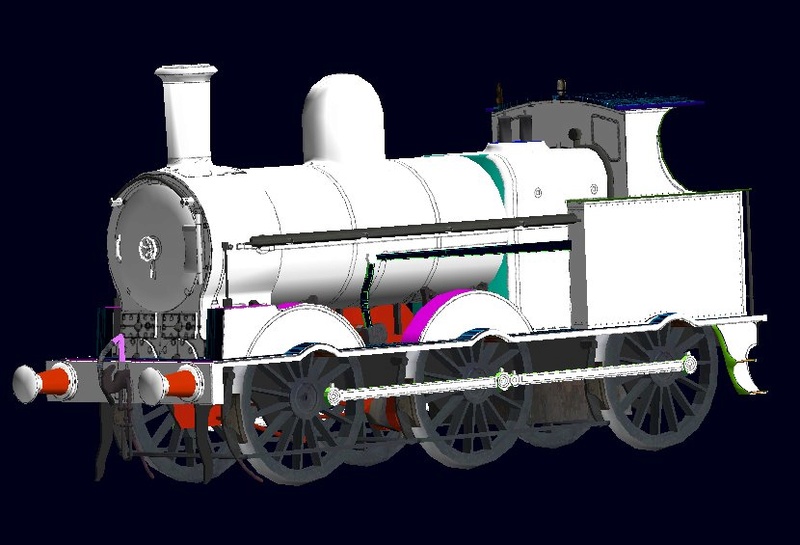 Now onto the tender, then textures, physics and maybe cabs...

That is a lovely model! Can't wait to see the finished product. 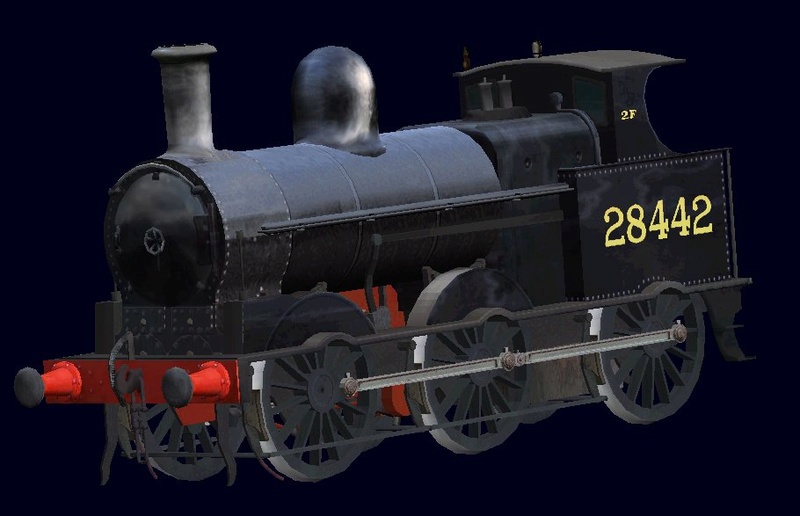 At last to texture... loco and tender constructed. (No cab yet.) The loco loads and works in Open Rails but I can not get it to load in MSTS. It is not oversized compared to some of my other models... Suspect I will just have to check a part at a time until I can find and remake whatever tiny part MSTS does not like.

[Looking rather clean here, but will need some heavy weathering to look the part for North Staffs c 1946.]

Still impresses! It would be of benefit if you can get it to load into MSTS as it would be a great addition to the L&NWR route and stock currently in progress. What are the chances it could be repainted in L&NWR livery?

Good news... it does load into MSTS. (For other people, as it seems my MSTS installation has gone haywire again.)

So there will be one along in LNWR livery. However I will need to make a different tender for it (well resize things a bit) as they originally had 1800 gallon tenders, as opposed to the 2,500 gallon tender I have made for the later version. 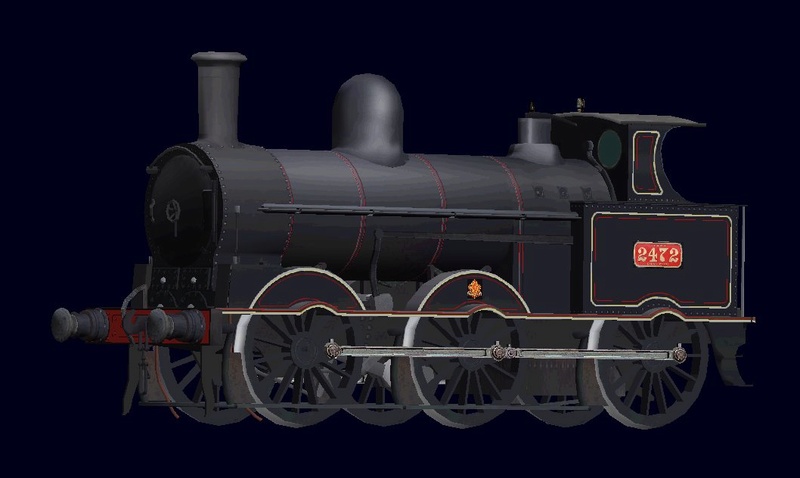 Versions with late LMS and early BR livery will appear in the North Staffs pack.

Then I will work on some earlier LMS versions.

There are a large number of LMS and LNER vehicles (mostly ex LYR, ex LNWR and ex NER ) in progress for the Huddersfield route.

Here are some of the more unusual vehicles: 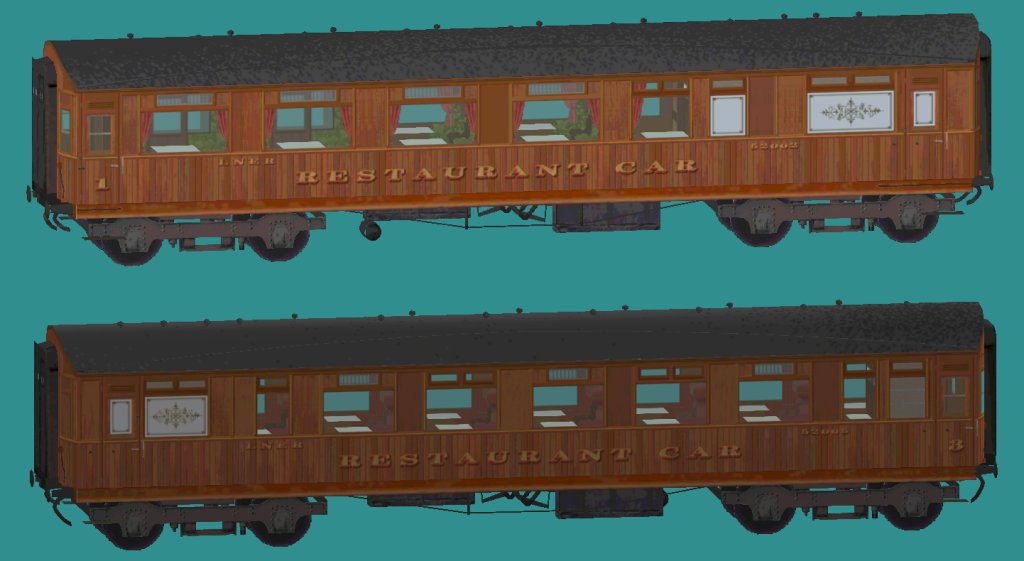 Can anyone identify them? Does anyone know their connection with the MSTS Huddersfield route (at least up to 1928 and I am assuming up to 1930).

The answer to the above is that they were built by the North Eastern Railway at York in 1905 as Great Northern and North Eastern Joint stock for working in the Kings Cross to Newcastle express. In 1925 the LNER transferred them to the Great Central section where (in 1927) the were rostered for the Marylebone to Bradford express trains. (They were possibly superseded by LNER vehicles by 1930 - but they may have still been in the train at that date - I don't know for sure - so I am including them as interesting vehicles.)

Another LNER vehicle that would have found itself passing through Huddersfield in 1935 was an ex Great Northern Third Class Dining Car. Built by the GNR in 1901 as 2992 it became LNER 42992 and then after transfer to the North Eastern Area LNER 21473. It ran in the 9 am Newcastle to Livperool Lime Street and 5 pm return train. It was withdrawn in 1938. I have been able to put together a model using the LNER diagram.

Some things I have no information about are:
(1) Under floor equipment - location of battery boxes, gas tanks, brake cylinders, dynamo
(2) Roof detail - position of torpedo vents, hatches and so on.
(3) Clerestory side detail - lights and ventilators.

If any one knows any more or has any photographs please get in touch.
Failing that I will make some guesses based on Midland and LNWR vehicles of the same era.