This part is not intended to show how a route is constructed, but it is hoped it will give some insight into what goes into a route.

A typical MSTS folder content is as shown below, highlighting the ROUTES folder location:- 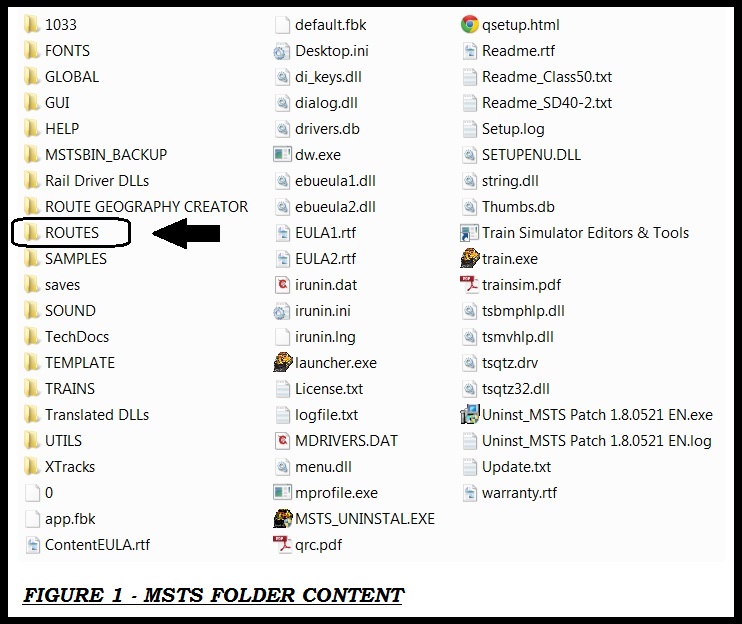 The ROUTES folder contains all of the installed routes including the default routes from the original. An example of a ROUTES folder is illustrated below:- 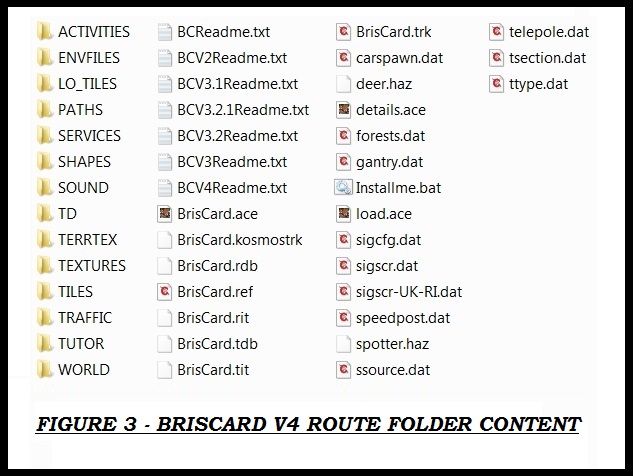 Rather than describe each part alphabetically, the list is separated into the four folders relative to activities, and the rest which are used for actually setting up the route.

The following files are those used for setting up the route:- 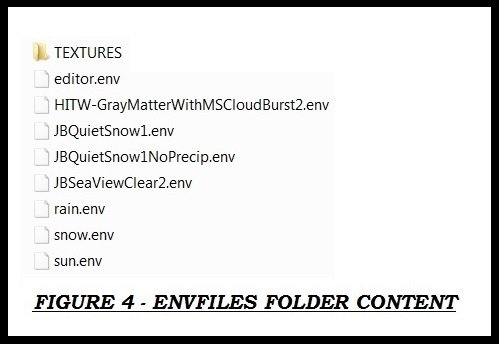 Envfiles – xxxx.env - contain data for the representation of the environment in terms of sky and water; and the files within the Textures sub-folder are the ACE files that define the sky and water textures - see below. 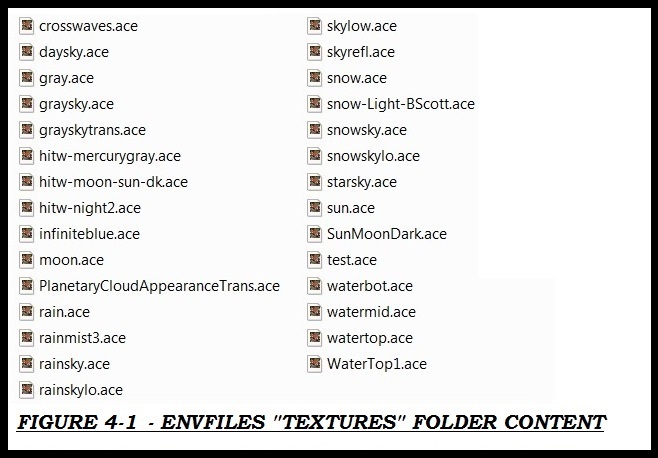 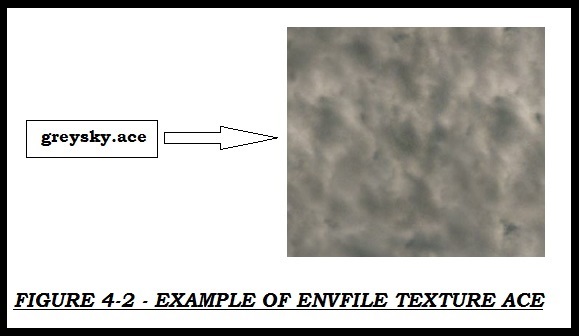 LO_TILES are the low-resolution terrain textures for distant viewing. These textures were not used in BrisCard V4 and typically are not used very often. 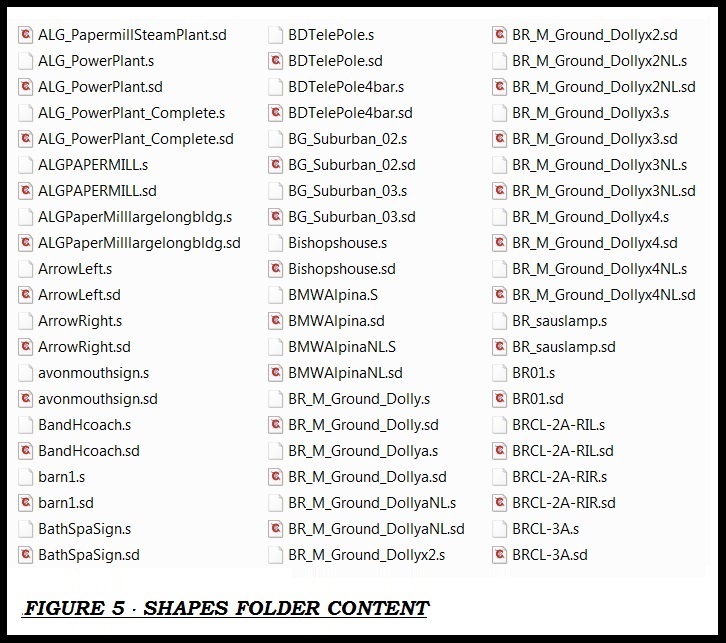 The shapes folder comprises a series of files that define the three dimensional objects that populate the route, namely xxxx.s and xxxx.sd. The xxxx.s contains the shape data together with the name of the xxxx.ace file(s) it gets textured with. The corresponding xxxx.sd file contains the extended shape data, which includes information on alternative seasonal and time related - e.g. night - textures. 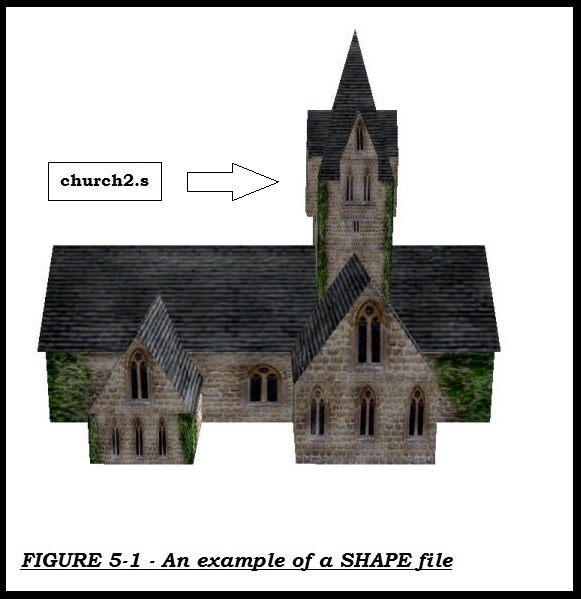 The Sounds Folder contains sound files – xxxx.wav and xxxx.sms – that are specific to the route, as distinct from the generic sounds found one folder level up.

The TD folder includes the actual "quad tree" together with the geographical location and tile boundaries for the route. 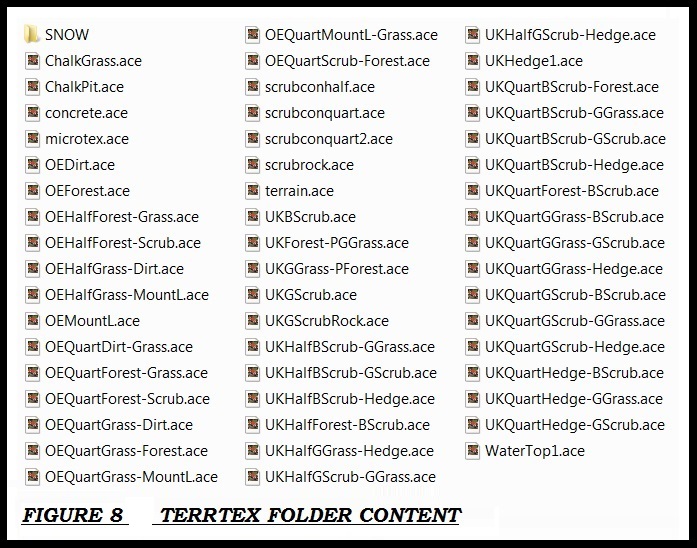 The Terrtex folder contains the terrain texture files. In effect this allows the ground to be covered in flora by applying a tile texture to the little black bordered square on the ground. The subfolder SNOW needs to have the corresponding ace file for each texture actually used on the route, otherwise there will be missing file errors when driving in winter. 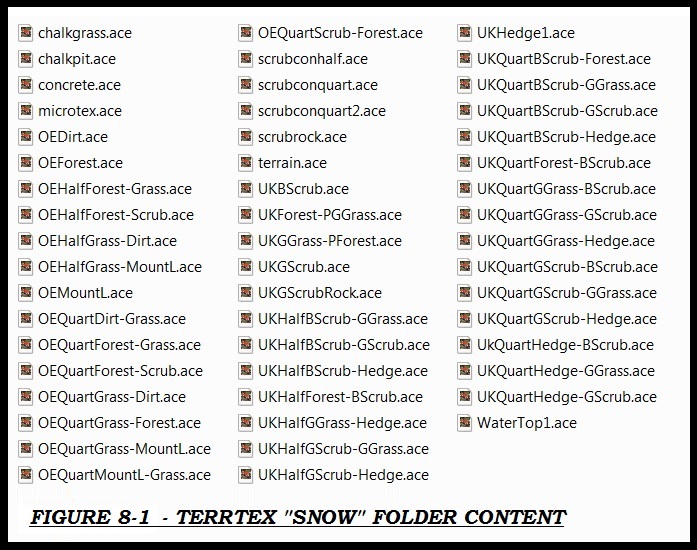 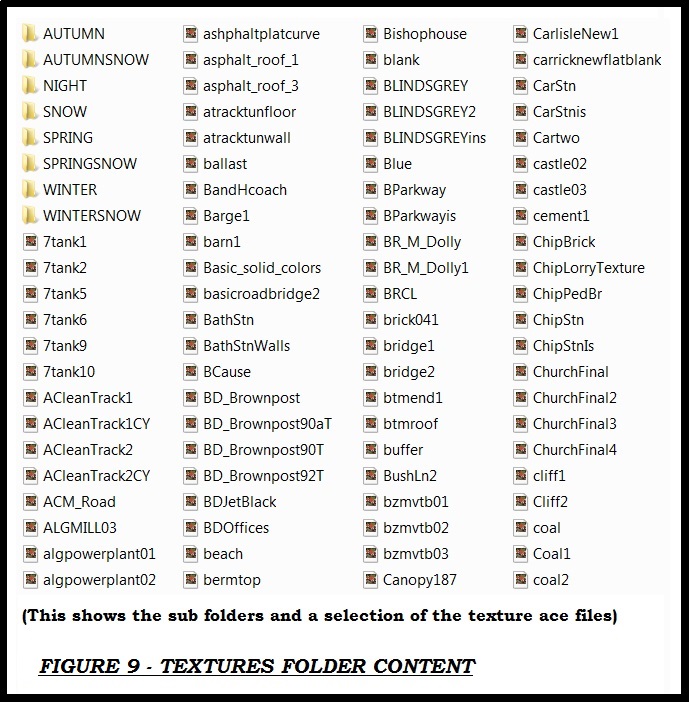 The Textures folder contains all of the “skins” for all of the objects in the Shapes folder, together with a series of sub-folders - Autumn, AUTUMNSNOW, Night, Snow, Spring, SPRINGSNOW, Winter and WINTERSNOW. Therefore flora can typically have eight (

different textures, showing up in the base Textures folder together with the sub-folders, except Night. It is not uncommon for a number of objects to only have the base texture. If an object lights up at night then it will have to have a Night texture. 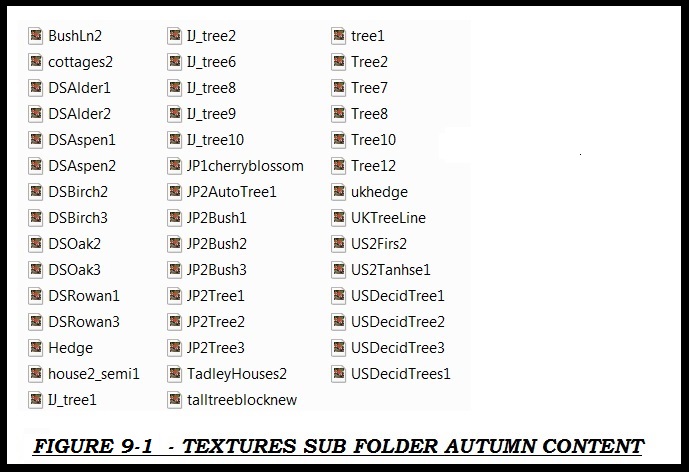 The Textures folder contains all of the ace files except those in the ENVFILES and TERRTEX folders. 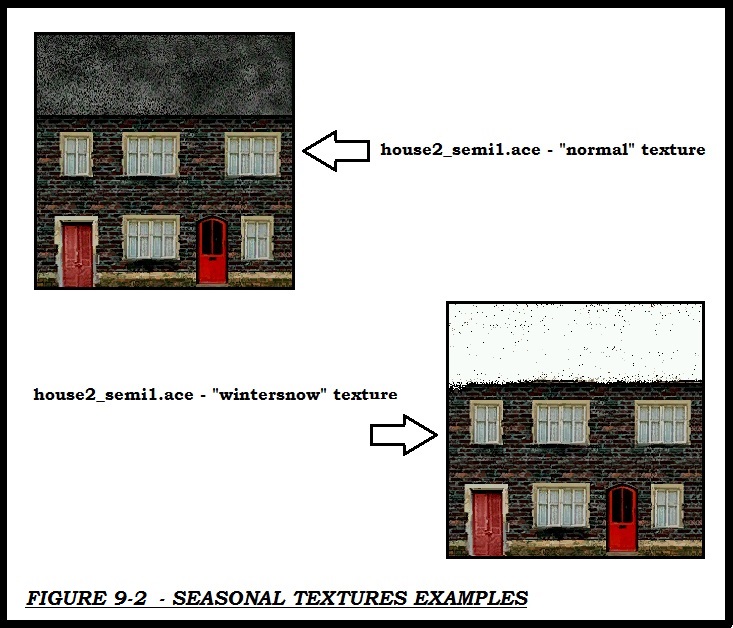 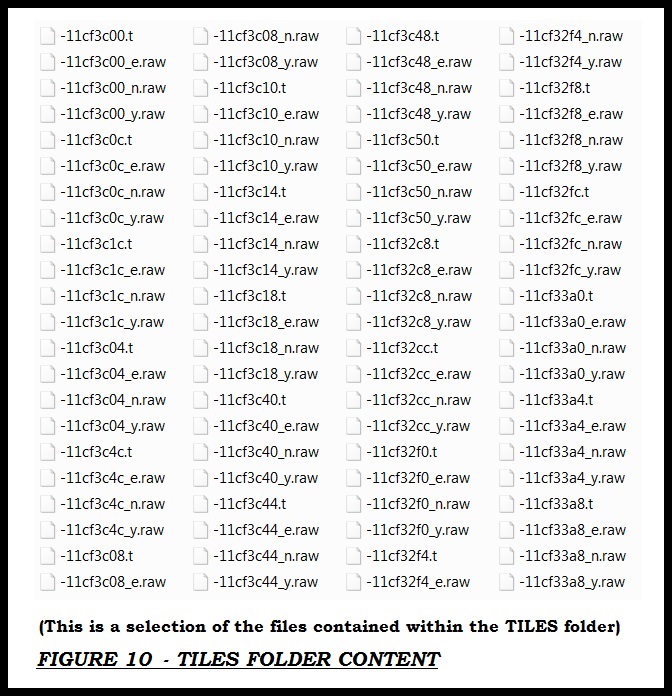 The TILES folder comprises either xxxx.t or xxxx_y.raw, or both, and these contain the terrain elevation information; i.e. hills, valleys, etc., plus the information on which TERRTEX ground texture is applied to each tile. The xxxx_f.raw files are generated by placing siding and platform markers, whilst the xxxx_e.raw and xxxx_n.raw are for "lighting” and “geometry". These are automatically generated by the sim if they are missing, which is why it generally takes longer to load a newly installed route, as these are usually deleted to save space in the zip file.

The Tutor folder typically has nothing in it, and can generally be deleted. It is created when setting up a new route from the template folder. The default tutorial route does however contain data. 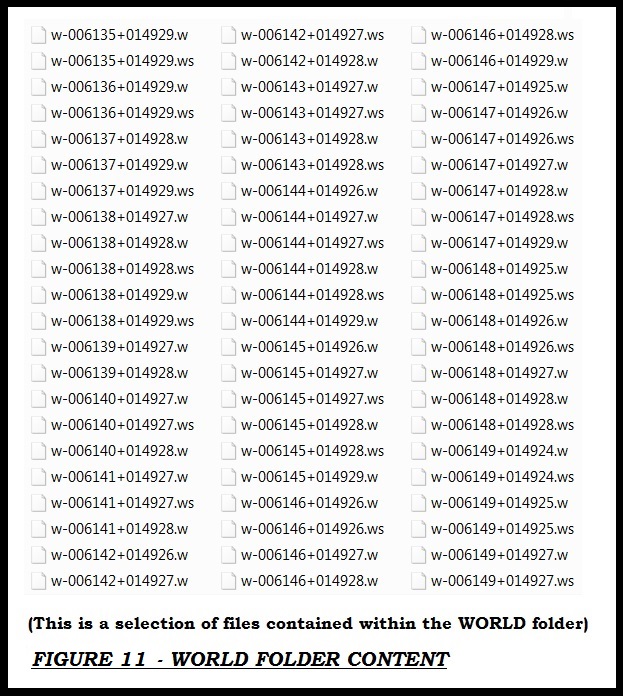 The following files are those used for setting up activities:- 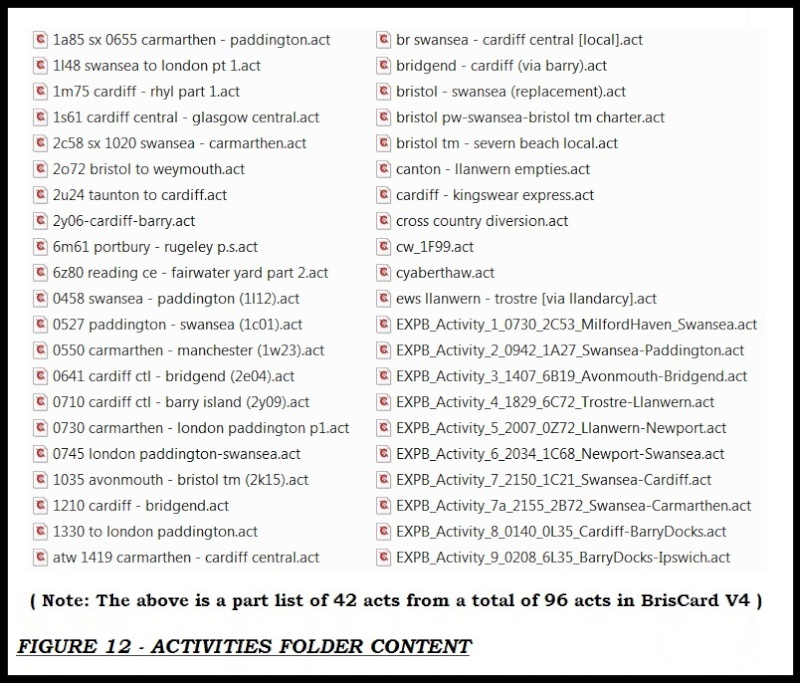 Each of the above activity files – xxxx.act - contains information on the paths, services and traffic as well as the location of each specified loose consist. In addition it contains the relevant data for the activity schedule and any events during the activity. Activities are described in more detail here. (A link will be added later.) 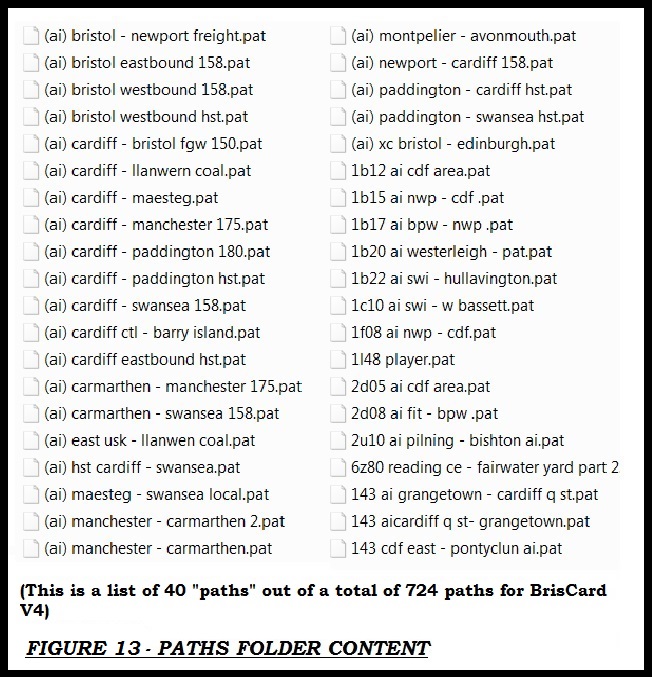 Each of the above path files – xxxx.pat - define the specified path that each train takes over the route. It is these files that will get outdated by any alterations to the track layout, and cause the infamous "broken path" errors since the specified path within an activity file no longer matches the altered track configuration. Paths within activities are described in more detail here. (A link will be added later.) 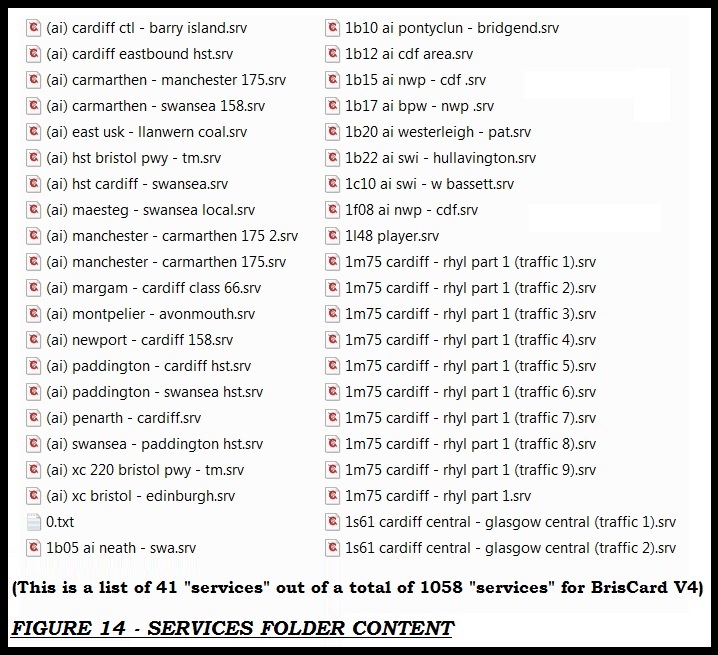 The services files – xxxx.srv - contain details of trains/engines that move on the route, and include the player and AI trains within activities. Each of the service files contains data on the consist, and the path files for that specified service. Services within activities are described in more detail here. (A link will be added later.) 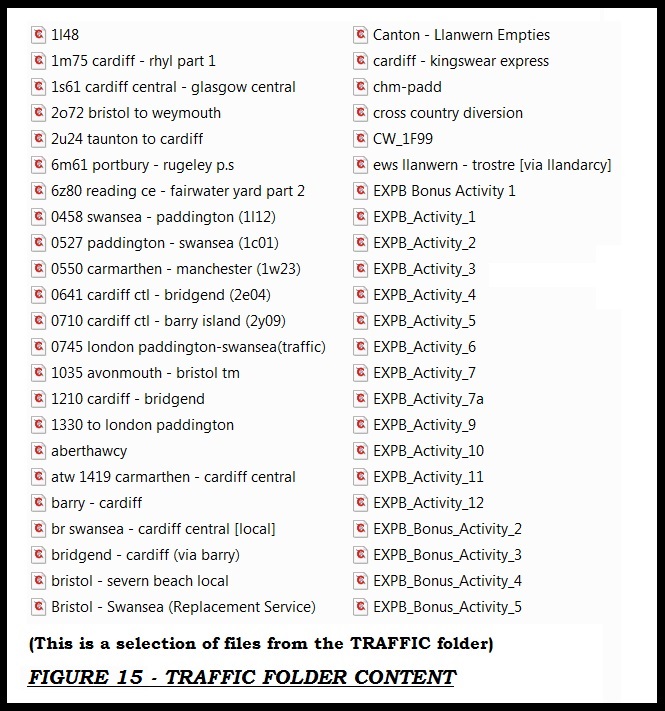 The Traffic folder comprises a series of xxxx.trf files, which contain the services and starting times for AI traffic trains. Traffic within activities is described in more detail here. (A link will be added later.)

Below all of the folders come a series of files under the generic name of ROOT FILES.

BrisCard.ace, details.ace, load.ace - these files define the pictures that display at various stages during the loading of the route.

BrisCard.tdb - this is the Track Data Base for BrisCard and effectively defines where the trains can be driven within the route.

BrisCard.rdb - this is the Road Data Base for BrisCard and effectively defines where cars and other vehicles can move.

BrisCard.ref – this file lists the static objects used by the route editor in developing the route.

BrisCard.rit – this file defines the location of “car spawners” and level crossings in relation to the roads.

BrisCard.trk - this file essentially defines the entire information specific to this route. It includes the references to the environment (skies) and properties such as speed limits, electrified/wire height, etc. 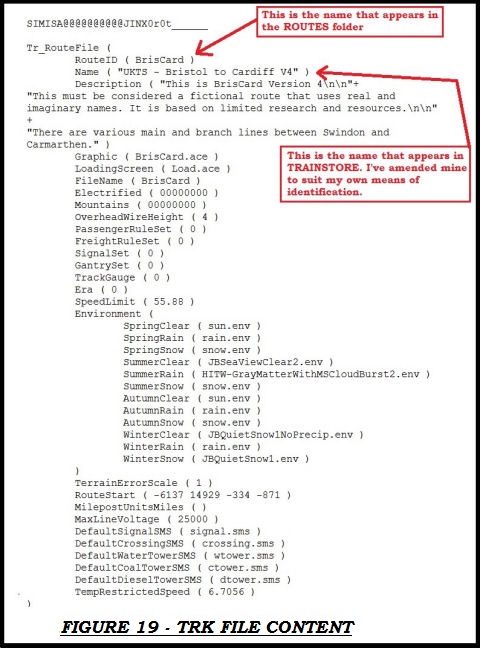 installme.bat - this file installs static objects from default routes required for this route.

deer.haz, spotter.haz - these files define items such as deer that may jump in front of moving trains; i.e. constitute a hazard!

DAT files give access to interactive and other special non-static objects, and the typical ones are noted below:-.

forests.dat - this file defines the forest regions available within the route. Again, the matching shapes and textures for each tree type must be in the route. 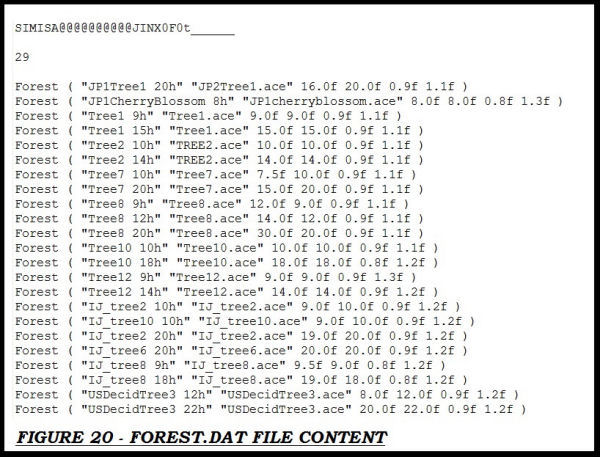 gantry.dat - this file defines the gantries available within the route. Again, the matching shapes and textures for each gantry type must be in the route. 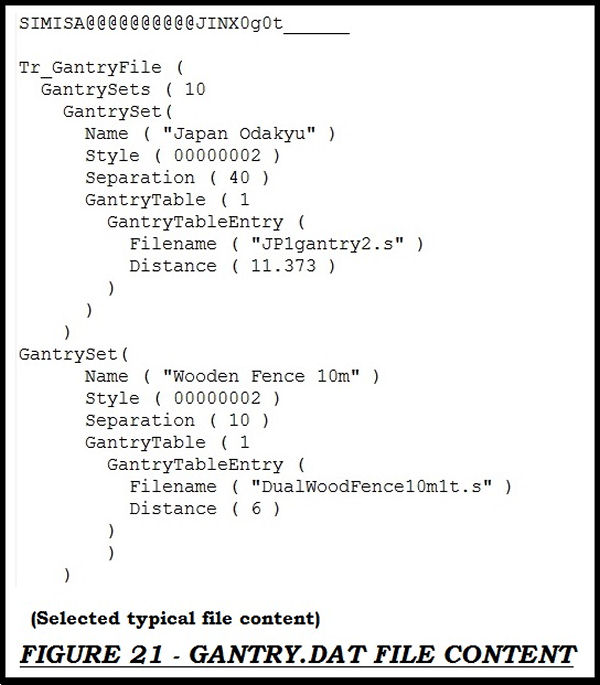 carspawn.dat - this file lists all the different cars that will appear moving out of a “car spawner”. Matching shape and texture files must also be in the route. 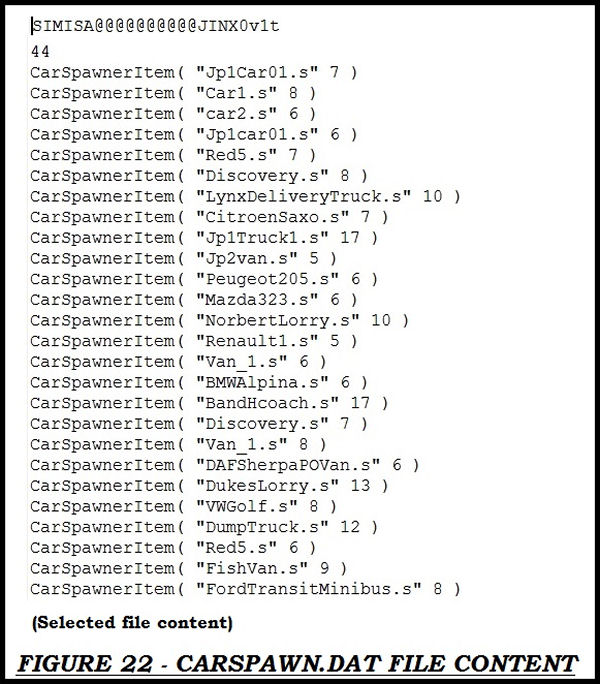 speedpost.dat - this file defines the speed posts used in the route.

ssource.dat - this file enables access to the static sound regions within the Sound folder.

telepole.dat - this file relates to telephone poles used on the route.

tsection.dat – this file contains the information for the track in the route.

ttype.dat - this file defines all of the track sounds for the route.