Today I got this error message when I opened Route Riter:- 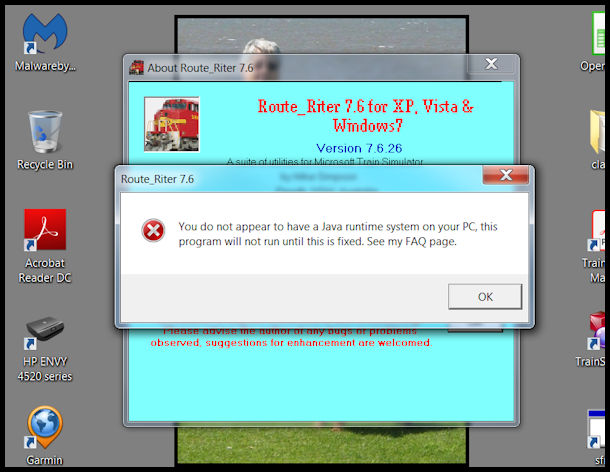 I then downloaded and reinstalled Java - jre1.8.0_241 - assuming something had happened??? After installation and restarting the computer Route Riter gave the same message. On clicking the OK button Route Riter worked as normal. I then closed RR and started it again and yet again got the same message. My browser is Google Chrome and I believe this  is not keen on Java. Could this be a reason for the message or is it something else? Any suggestions would be appreciated?

Hi Alec,
There is no problem running Route_Riter with Chrome also running!  You say Chrome doesn't like Java, but that doesn't matter to R_R because it doesn't use the browser!!

I think the real reason may be because you haven't created a folder named -  classes - in the main Java folder, and then copied the contents of the Route_Riter/TSUtil folder into it.
If you haven't already done so, I suggest you also create two empty folders within the Route_Riter folder named - TempFiles and TempFiles2.  This is because R_R creates these folders, by default, in what is now a Windows protected folder and, for some actions, needs to write to them, which it's now unable to do!

...and another issue I had that has been resolved

I am guilty of not reading instructions. lol
Cheers for both the question and answer.

All the best and hope 2020 is treating everyone well

I only hope it has solved Alec's problem!!

Hi Ged
Thanks for the reply and suggestions but they do not resolve this oddity. Whenever I update Java I always copy the Classes folder from the previous installation. I haven't touched Route Riter so the TempFiles and TempFiles2 folders are already there.
I call it an oddity because Route Riter works after clicking the OK button on the error message and hence must recognise that Java is present, although the error message says it isn't!

Hi Alec,
Well, that is an oddity!!  However, first things first - when you install Route_Riter, it DOES NOT add TempFiles and TempFiles2 folders into its own installation folder!

Now, back to the oddity ....
I have recently switched to using Win 10 full time and had never used Route_Riter until today!  When I did, I got the message that Java wasn't installed and checking with the Java folder in C:\Program Files, found it there but without the 'classes' folder.  On creating it and populating it with the contents of the TSUtil folder, R_R now starts without displaying that message.

It doesn't seem to matter to R_R whether you're using the 64- or 32-bit version of Java.  I suggest that you closely check your C:\Program Files and C:\Program Files (x86) folders; if you've got Java in either, make sure there's only one version of Java in each - preferably the latest!  If you've got Java in both folders, make sure each has the populated 'classes' folder.  I have a feeling that if it's in Program Files (x86), R_R will use it in preference to that in Program Files. The 'one version only' is important because if you've installed a new version of Java, not deleted the old version and not copied the 'classes' folder over, the System, and, therefore, Route_Riter, will only 'see' the latest version, which is classes-less!!

Only some functions of Route_Riter actually need Java to be present - the simple Route/Activity/Stock Checks do not, which is why R_R will actually start and allow you to perform them.

I did as Slipperman recommended and it didn't work. I then moved the "Classes" folder to within the "jre1.8.0_241" folder inside the "Java" folder and that did the trick.
Does that help you Alac?
Jonathan

For some reason I have two Java folders one in Program Files and the other in Program Files (x86) as was suggested by Ged! Prior to my "oddity" report they had always been in the latter, and the recent Java install put it in the former as I have just discovered. Java have always downloaded the 64 bit version of any update that up to now appears to have gone to Program Files (x86). Anyway I have copied the Classes folder into the Program Files version and Route Riter now opens without any error message.

Shortly after I had successfully copied the "Classes" folder into Java as stated above I did a Java update. It kindly deleted the "classes" folder! I have just reinstated it.
So whatever you do retain the "common" folder somewhere safe.
Jonathan

Hi
@ Jonathan : With respect, my recommendation has ALWAYS been to create a 'classes' folder in the main Java folder, so I don't know where you went wrong previously!! Maybe you put it in the 'Java' folder?

Sorry, a typing error on my part in the last post. I meant that one should always have the Route Riter "classes" folder kept somewhere safe and easy to find (naturally in the Route Riter folder at least) as if a Java update is installed it will delete the "classes folder" along with everything else when it installs the new version.
And yes, I meant to put it in the folder inside the jre1.8.0_241 folder, not in the outer Java folder. The latter is what I did the first time which didn't work.
Incidentally, I must have created the TempFiles and TempFiles2 folders inside the Route Riter folder as they are there but empty. But it must have been because of what I read some time ago as I have no memory of doing it.
Anyway, working again now.
Jonathan

All I would say in conclusion is that when I first updated Java (jre1.8.0_241 and those before) it installed in Program Files (x86), when the error appeared and I reinstalled Java (jre1.8.0_241) it went into Program Files. As I said I found this odd but now that I have Java in both folders it will be interesting to see where the next update installs? Anyway Route Riter appears to be working normally so onwards and sideways!

I should really differentiate between the 'Java' and the 'JRE1.*' folders!!