Over the years many people have asked the same question: “How do you drive a steam engine in MSTS?”

There is no one definitive answer to this question, and there have been many different versions of how you “should” drive a steam engine - some of which seem to contradict each other. Justin would like to offer a broad look at how to drive a steam engine.

”The first thing I would like to make clear is that I am in no way a professional steam locomotive driver; I have received no training in this area, and all my knowledge comes from driving many different engines within MSTS.

Secondly; and this is the biggest, most important piece of advice; no two classes of engines will behave the same. Whilst an A3 will drive similarly to an A4 there are minor variations. It also depends how the author of the model has set up the ENG file, whether they have used the original SCOTSMAN file, set one up to be as realistic as possible or they have compromised to make a poor steaming engine better for the sake of being able to drive and enjoy the engine.

Now I have chosen the NSWGR C38 class of steam locomotives as being a reasonable example for this article. 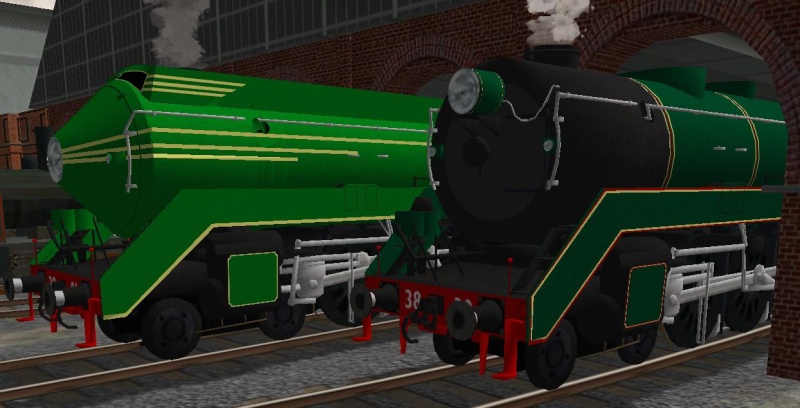 Locomotive overview
The NSWGR C38 class was designed in the mid 1930’s to be the most powerful class of passenger engine in service in NSW, and was designed to eliminate double heading. The primary reason behind this idea was that the ever increasing weights of express passenger trains required the services to be double headed, but where the load exceeded the limit of one engine but did not need the full power of the second locomotive. The class was delayed due to the start of WW2 and the push for more powerful locomotives became all important. As soon as the engines were completed (minus painting of a top coat or main colour other than works grey) they were quickly pushed into front line passenger work and quickly proved to be free steaming and easy to work with. Post WW2 the engines settled down to the heavy post war expresses and were even to be found on freight workings.
They were built with roller bearing axles to make them easy to move.

Driving a fully loaded 38 with automatic fireman on
The 38’s are considered to be a good beginner’s engine, as it is quite easy to keep the boiler pressure up and they are quite forgiving if you make a mistake in trying to get their power down. In addition wheel spin is relatively rare.

Moving off[
1) Make sure the cylinder cocks are open, the reverser is at 80 and the locomotive brakes are off.
2) Release the train brake (brake pressure is 70psi), and this should only take a few seconds.
3) Gently open the regulator to 30%-50% (depending on the load) and let the train move gently.
4) As the train picks up speed to around 20mph drop the reverser back to 50 (if in a fast [50+ mph] section). If in a slower section (below 50mph) wind it all the way back to 20.
5) At around 15-20mph; close the cylinder cocks and set the train brakes to hold.
6) At 20mph in a fast section open up the regulator to 100%.

Running
1. Once you are above 30mph you need to keep an eye on the steam usage rate.
2. To keep the generation rate high you will need to wind the reverser in, keeping an eye on your speed and the track speed limits. At around 40-50mph you really only need 20 on the reverser and the 38 can be allowed to use its immense “grunt” to do the work.
3. A 38 is quite capable of gliding along with a heavy train. Once you are within 10mph of the track speed limit, close the regulator down to around 20%, keeping an eye out for hills and slower speed limits.
4. To slow the train down to keep it under the speed limits use the engine brakes rather than the train brakes.

Going uphill
This is where a 38 comes into its own.
1) As soon as the climb starts, open up the regulator to about 70%.
2) If your speed starts to fall open the regulator up all the way to 100% and start to wind the reverser out to 30-40. For heavy loads on steep inclines you may have to go to 50.
3) Keep an eye on the speed limit as a 38 can really put its power down going uphill (I have read in the book on the 38’s [and reproduced the same thing in the sim] that 38’s would often be lifting their safety valves going uphill due to the engine having too much boiler pressure).
4) As you near the top of the grade shut off the regulator and let the train roll over the crest. For heavier loads you may have to wait till half the train is over the top before shutting off.

Reversing
Basically the same principle as going forward is applied except that you have the strain on the front of the engine.

Running light engine
Whilst shunting the engine or moving off without a load you only need 10-20 on the reverser, as there is no weight pulling against the engine, holding it back. Only a low setting needs to be used, less than 50% regulator and light braking to slow it down.

Driving a 38 (with automatic fireman off)
The above methods still apply and there are only a few more things to consider when driving a 38 with the automatic fireman off.
1) With reference to the injectors, the typical advice is to have the driver’s side injectors on and use the fireman’s side when needed. A real 38 can survive for most of its trip with only the one injector being needed. In MSTS use injector 1 as the driver’s side - using the [I] and [K] buttons) - and injector 2 as the foreman’s side – using the [O] and [L] buttons). Keep an eye on the water level as you may not need the driver’s one on all the time.
2) With reference to the blower, use it the same as every other engine in a tunnel. If you are running out of boiler pressure whilst running (due to misjudging the reverser setting) you can also turn this around to maximum, after shutting off the regulator, to help raise the boiler pressure. You can get away with running a 38 on 0% blower under normal conditions.
3) With reference to firing, a 38 is typically quite good with its coal, compared to some other types. Keep an eye on the fire mass (using F5) and when it starts to go down start firing. Feel free to leave the firebox set to open whilst driving and firing but remember to close it before going into a tunnel and also when the coal mass has come up.

The main issue with a 38 being driven with the automatic fireman turned off is that they are constantly blowing off due to the boiler being good at steaming. If you enjoy the sound of the safety valves lifting every few seconds, by all means drive this way, but I would recommend that it is driven using the Automatic fireman.

Further comment from Justin = The above is how I drive my 38’s, and to be honest when driving other steam engines the theory is much the same. Some engines require a much higher cut off on the reverser (the recently released 57XX panniers need to be run at 33-35 reverser for cruising) others (namely the LNER Pacifics) run at 23. With most engines you won’t be able to use the locomotive brakes to slow the train so you will have to use the train brake. Some engines won’t glide so you have to use 100% regulator all the time. The only way to be sure of “how to drive an engine” is through trial and error.

One thing I have noticed over the years is the number of people who say “never use the full setting on the reverser”. Whilst this may work on some high powered engines, on some of the lower powered engines or even a powerful engine with a very heavy load, full reverser is needed to get the train moving. After the train is up and moving at 20mph then you can reduce the cut off on the reverser.

Just remember that each class of steam engine is unique and will behave differently.