Hi all,
Sorry, but I had to do this! These beauty's are my Favourites of all steam!
Anything to do with Bulleid Pacifics, albeit Merchant Navy's, West Country's or Battle of Britain.
Anyway I will start off with a Bulleid. 34053 BoB Converted 'Sir Keith Park' made it onto the news today; 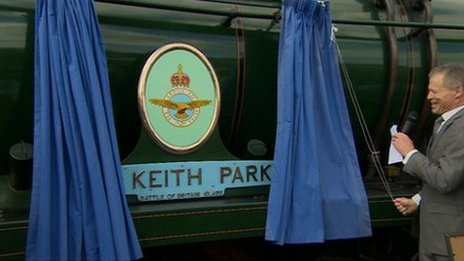 Congrats to the team at Southern Locomotives!

Hey guys,
I am on the lookout for a Colour image of 35006 P&O's nameplate. I have only been able to locate a B&W image. Any help would be really appreciated.

Will this do it's from a TMC model

Ben,
Thanks, but I had already seen this and I can't zoom in enough. I need something life-size and in Colour and a view directly onto the Nameplate like the B&W one I have seen.
Thanks
Andy

Hi Andy,
If you look at this web page : http://www.sheffieldrailwayana.co.uk/  you'll see the nameplate in the top right corner.  If you right-click on it and select Copy Image you can paste it into your graphics program - I assume you can also use "Copy image as..".   I don't know if the colours are accurate, but it comes out at a reasonable size and can be expanded.
It's not life-size, but if you have any trouble getting it, I can send it to you

Snap. I've just sent a BMP of this image by email.

Thankyou so, so much Ged and Alec...... Lovely find and thankyou for your email Alec Very much appreciated.

Great to have such helpful Gentlemen such as yourselves.
Best Wishes
Andy

P.S - Now I can get on with my next project idea as well!

Hi all,
My Video of yesterday last minute dash to Paddock Wood to Photograph and Video 34046 'Braunton' on the Golden Arrow. This is on the return leg from Canterbury. Enjoy!
Cheers
Andy

Thanks for sharing that.

Sorry for the quality,its a still taken from a short Movie I took today (Sat) as She thundered through Cwmbran in glorious sunshine running about 5 minutes early on her way to BTM 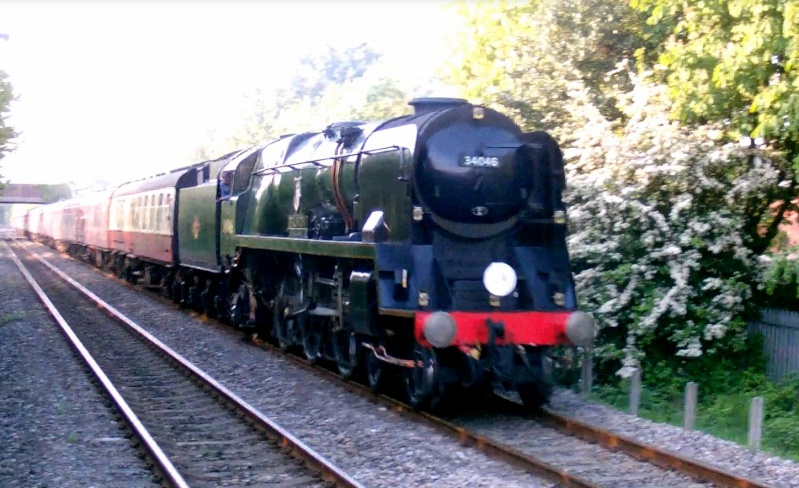 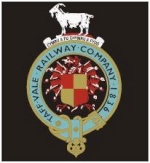 Have you uploaded this to You-Tube? If you have do you have a link please?
All Bulleid's should be on the Mainline as well as their home Preserved Lines IMHO.....

Braunton on a Mission

Andy,I hope you wont be to disappointed,I'm not much good with a camera and it only lasts a few seconds,She was in fact running 9 min's early,and going great.You are correct in saying all these preserved Engines should get the chance of going mainline,but I suppose cost is prohibitive.Regards

Last edited by neanderthal on Mon 19 May 2014, 7:25 am; edited 1 time in total (Reason for editing : original time stated was incorrect.)

An Interesting Report well worth reading has been released by RAIB regarding the Incident with 34067 'Tangmere' last year when the connecting rod came off just outside Winchfield on the 23rd November 2013. Here is the link; http://www.raib.gov.uk/cms_resources.cfm?file=/140616_R132014_Winchfield.pdf

The Midhants Railway has secured a Grant from the HLF (Heritage Lottery Fund) for her Overhaul. Here is the link; http://www.hlf.org.uk/news/Pages/CanadianPacific.aspx#.U626C01OW01
Fantastic news for my favourite loco!

*Edit* - I say secured, but currently only a first round application.... But hopefully shouldn't be too much of an issue going by previous times..

Hi everyone,
I saw this last night. Well worth a watch I think especially if you are a huge fan like me of Bulleid's! Merchant Navy's in particular! Incase you haven't guessed from my name!!

Hi everyone,
For anyone Interested or for those whom love Bulleids as much as I do! Here is the latest to 257 Squadron's Overhaul.... Looking great!!

As everybody must know by now, I am an avid Bulleid Pacific lover!

News on both of these links;

Fabulous news, Andy. That's the second one that I know of in the last few months after a healthy grant was given to the Bahamas Locomotive Society in Ingrow.

The work on 34027 'Taw Valley' has been going from strength to strength! Here is the old girl after what I call a Major rebuild and on the VSOE set! Hats off to the SVR team! And now they have 2 working Bulleids!!

And 34027 strutting her stuff! Turn the volume up for this one up Eardington Bank!

And this one is a closer one (Which I think is a dedication to Bert Hitchin whom saved her and sadly passed away recently.... 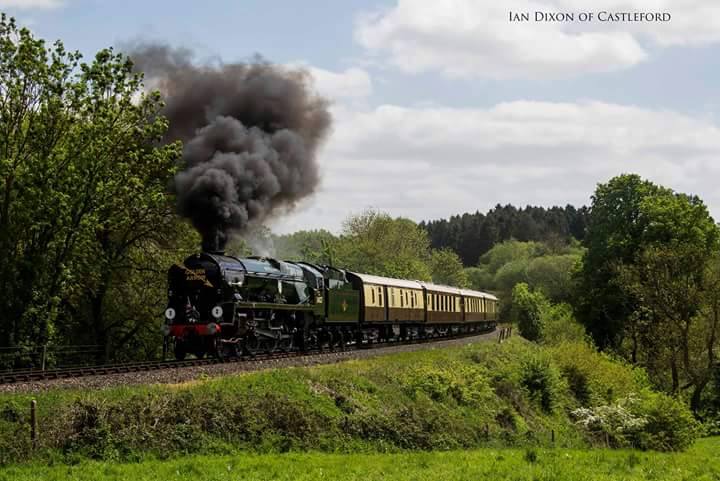 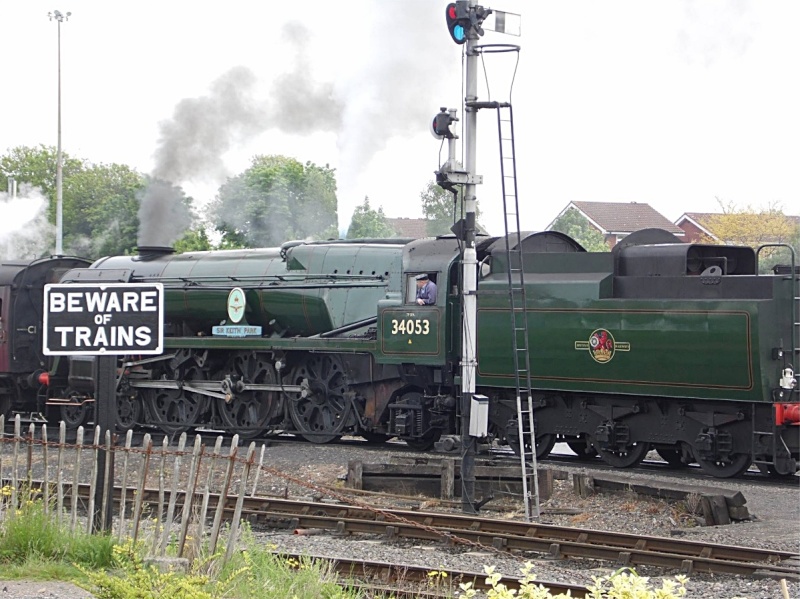 A video I made from Saturdays chase around the Surrey Hills with 34052 'Lord Dowding' - aka 34046 'Braunton' in disguise. Sorry; yes it's another Bulleid video again!

Good video Andy, thanks for posting, I especially like the bit where the train winds its way up the single line to join the mainline.

You will probably know by now how much I love my Bulleid Pacifics....There is another on it's way to completion.

Not my photos, but here is the latest progress on 35018..... Cannot wait to see her in Steam! She is apparently on the final stretch to being steamed since the 60's! So will it be next year or latter part of this year? 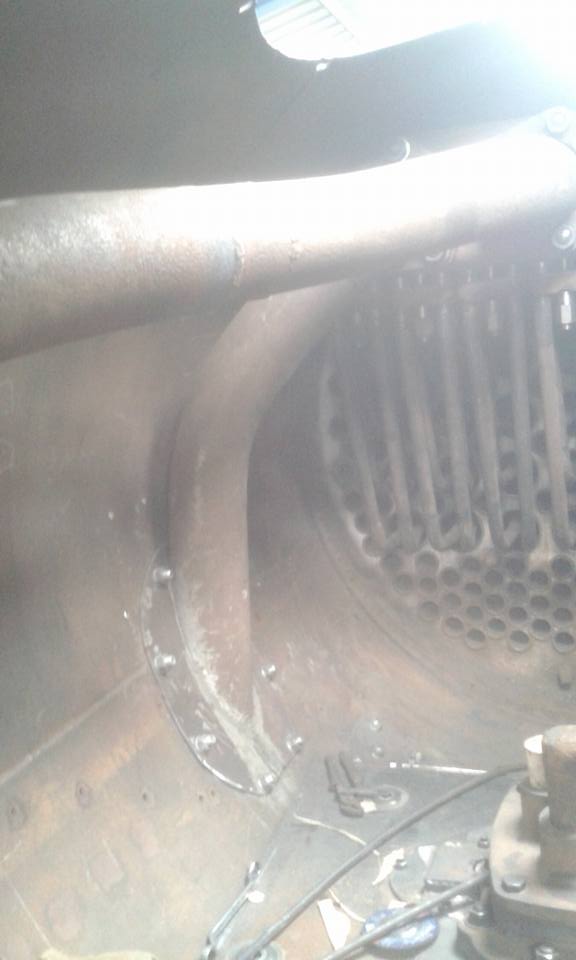 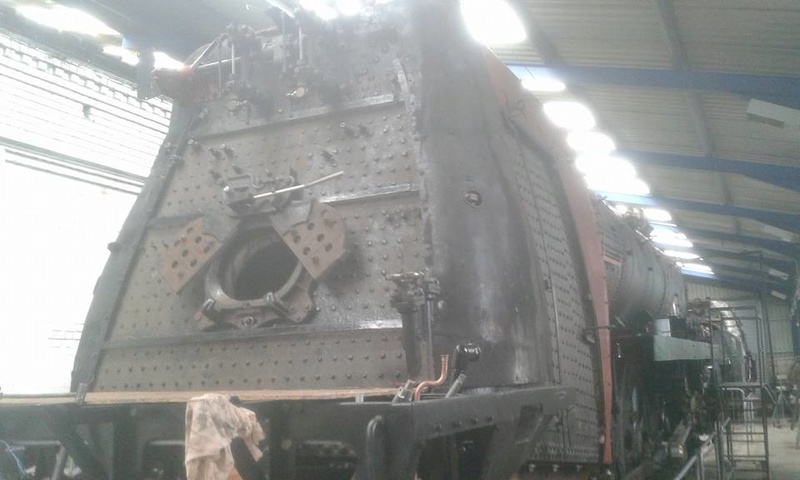 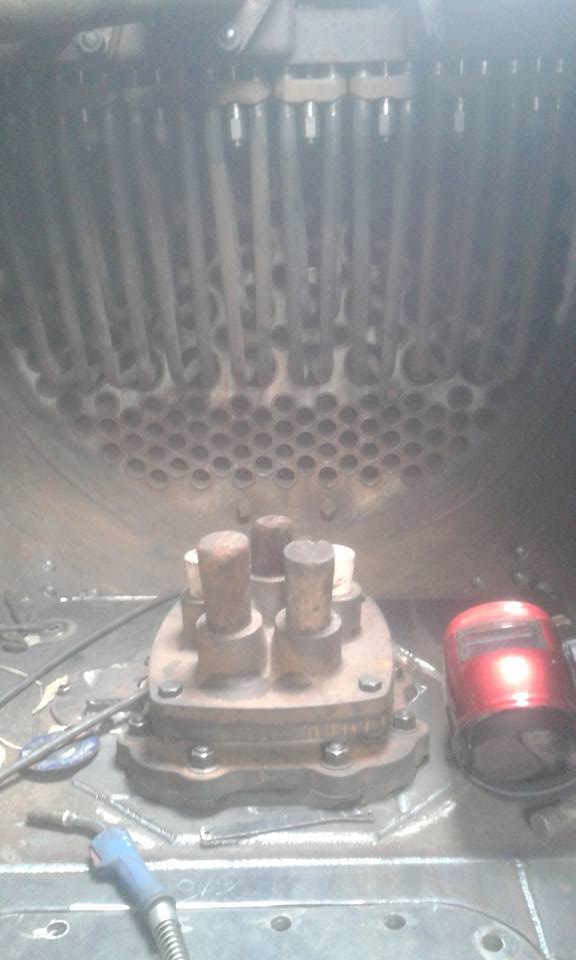 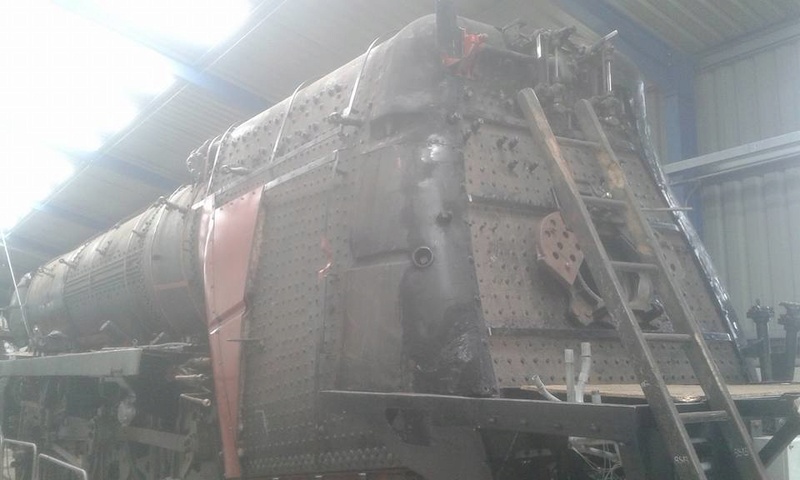 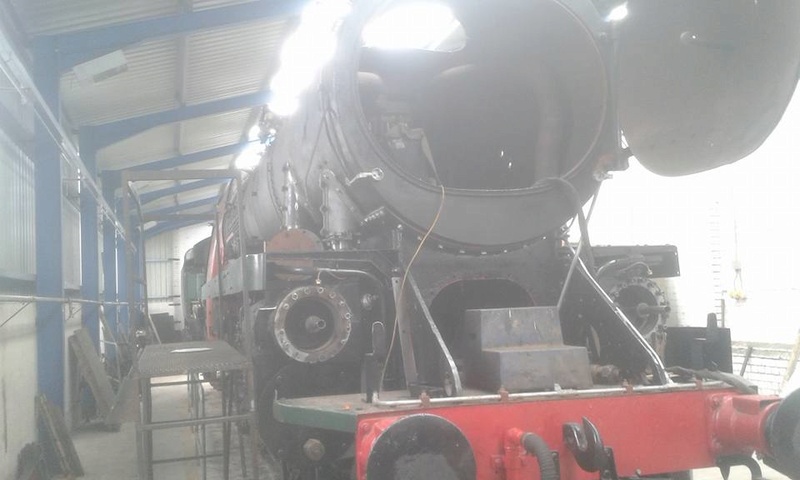 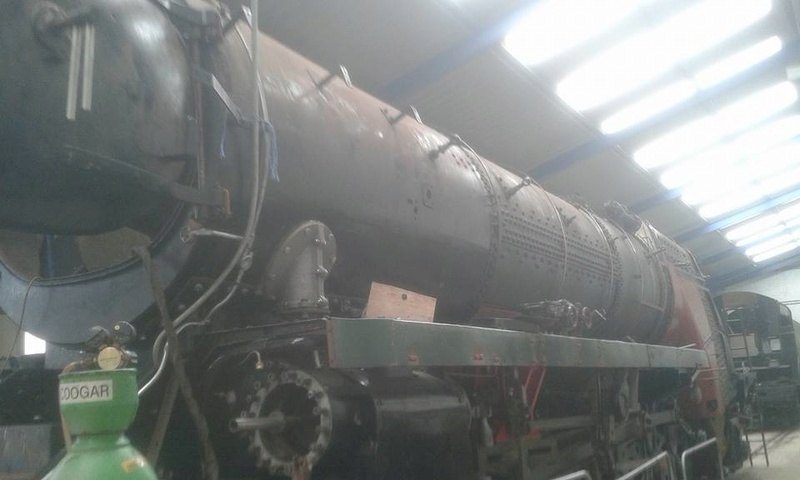 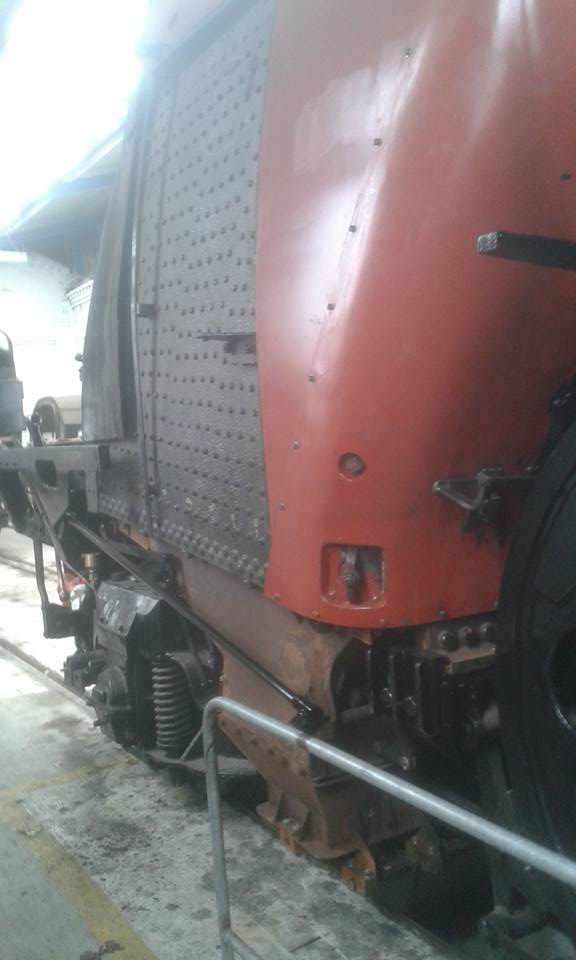 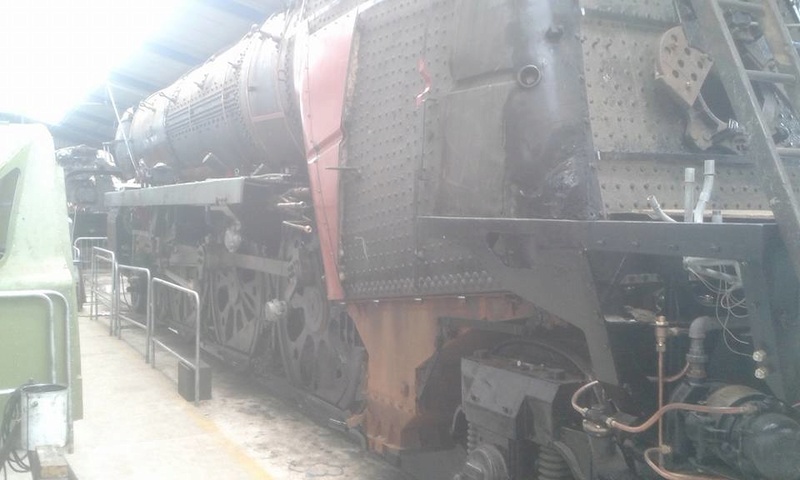 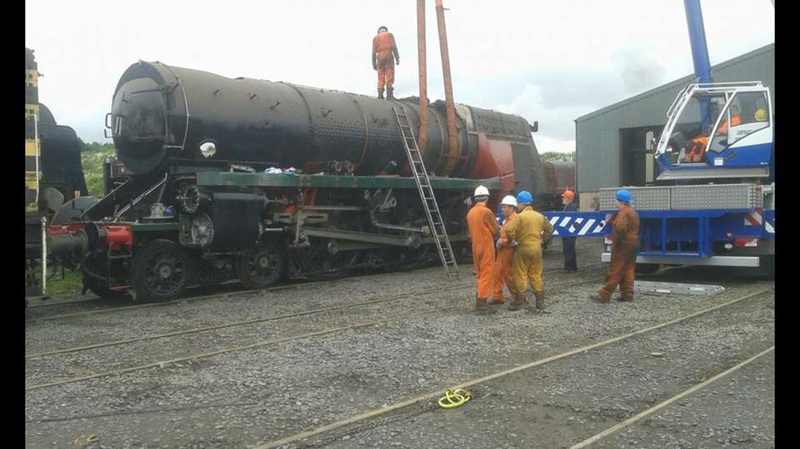 Latest update on my beautiful loco;

Not my photo's; but my thanks to Phil Calvert for posting the fab photo's and update

"Eastleigh works today, to see the progress 35005 CANADIAN PACIFIC......the wheels are in the old foundry, having been turned at the South Devon Railway...The boiler is being tubed at Ropley,,and the tender is somewhere in Derbyshire,...the frames are almost ready and the overhaul will be complete in 2018" 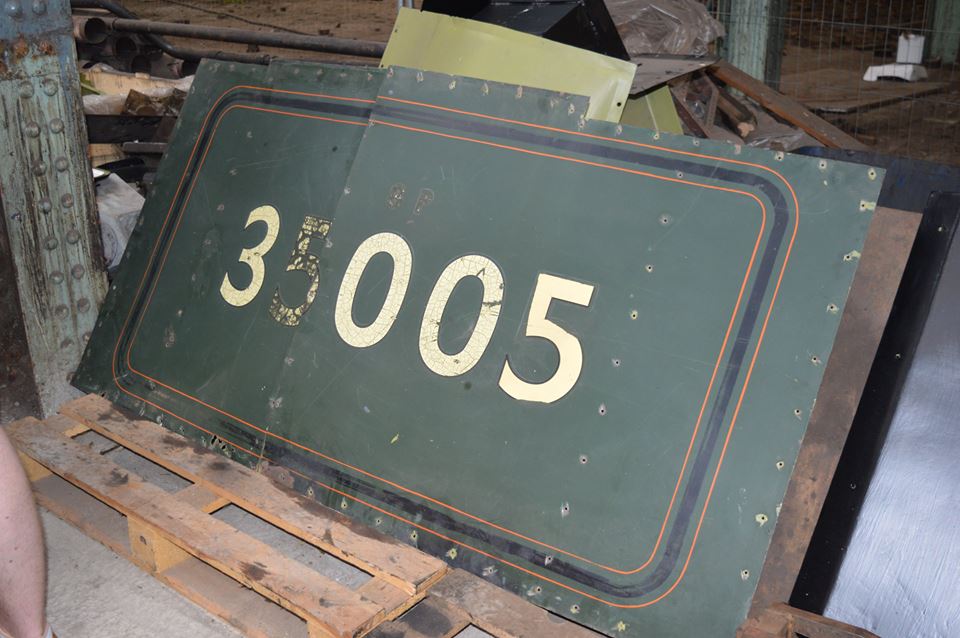 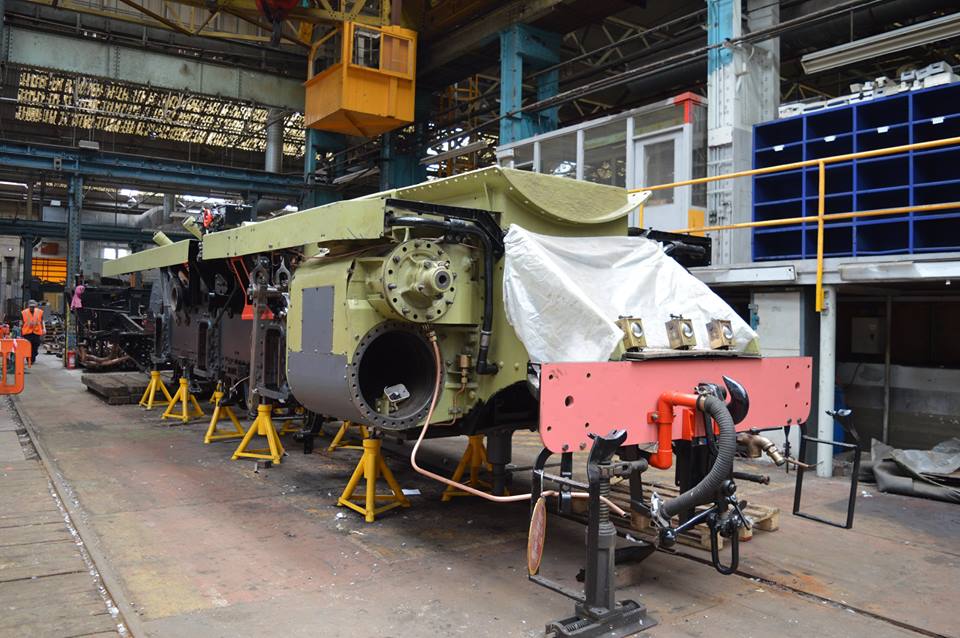 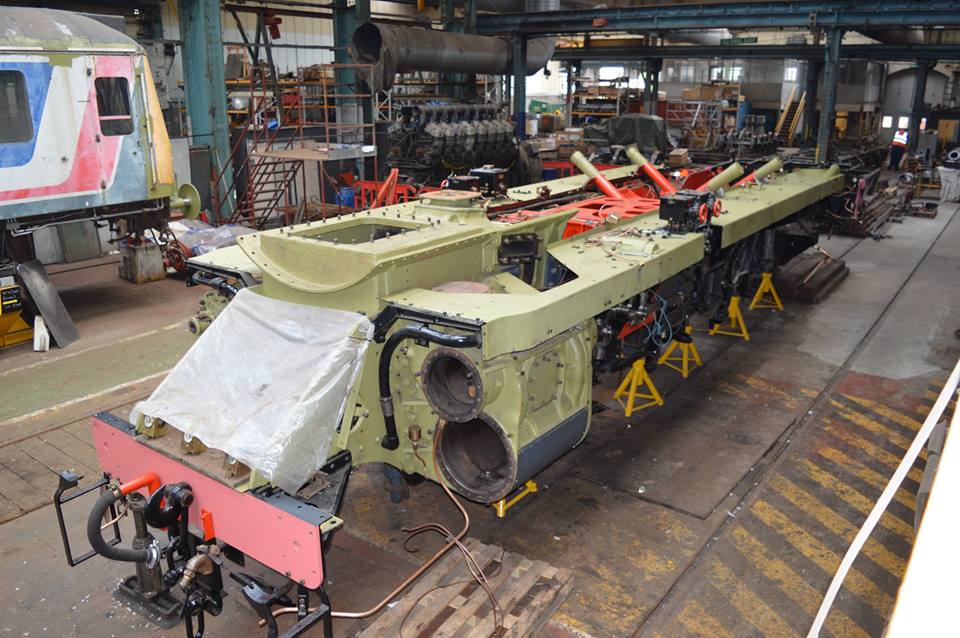 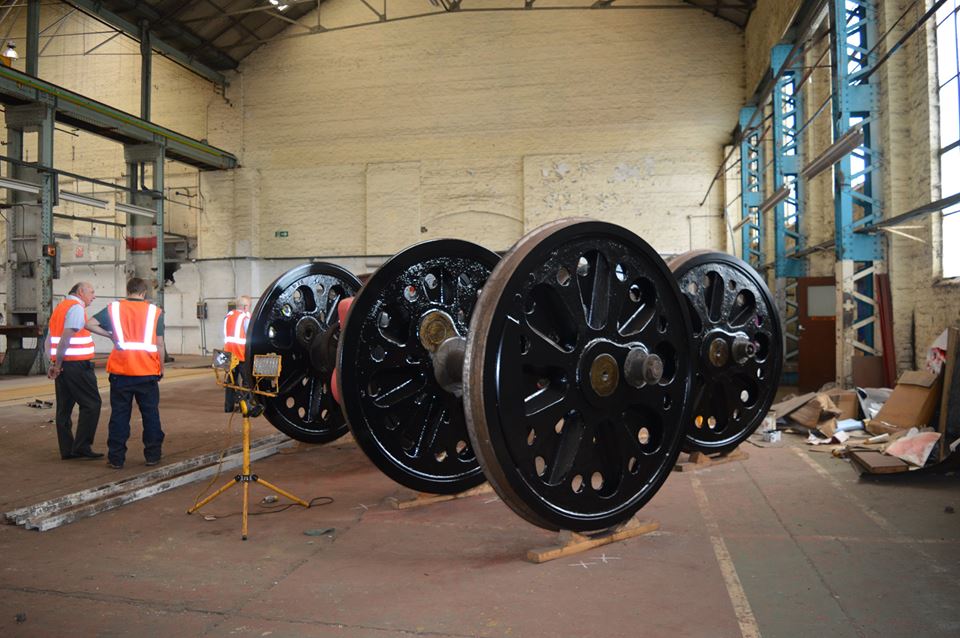 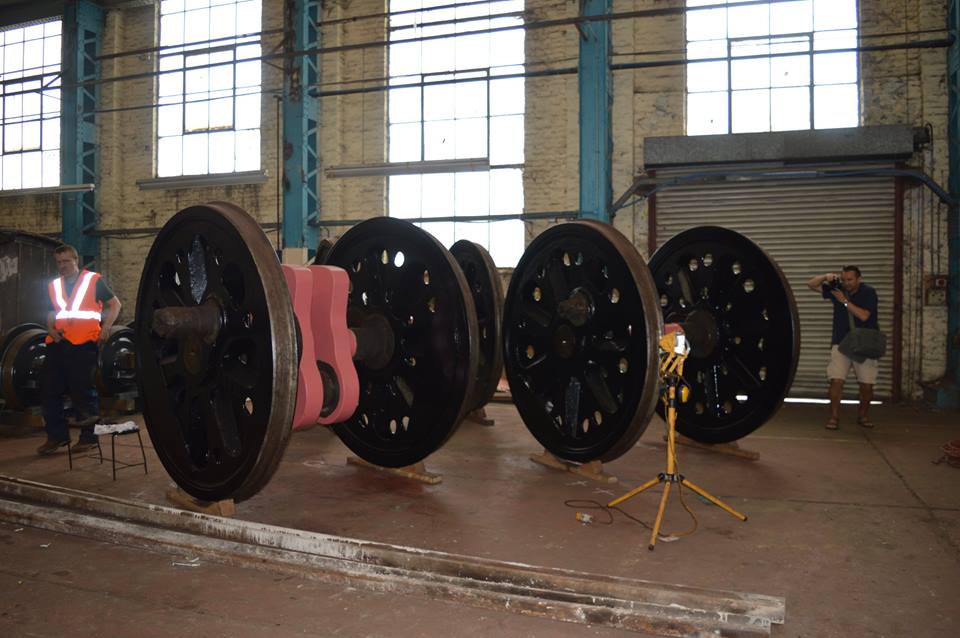 Driving down to Exeter on Friday 14/10/16, I didn't expect to see a steam locomotive on the motorway, but in fact that was exactly what I did see!

It was a Battle of Britain Bulleid Pacific on the the back of a low loader, namely 34053 ‘SIR KEITH PARK’!

I presume it was on it's way home after appearing at the KWR 2016 Steam Spectacular in early October (7th to 9th).

The only other trains I saw were several FGW HST's.

My first thought on seeing it was ; Surely, it wouldn't have carried that number (34081) with that livery in real-life, would it?  I'd have thought it'd be a 2C1xx number!

The poster has also linked to another site which shows it at Wansford in 2002, bearing the same livery and number, but it jars at bit!  The same site has a 2010 photo with her in the "proper" BR green.

I haven't managed to fathom the method of showing photos, so text will have to do. I have a photo of 34081 at Brighton in September 1948 when it entered service, It is  shown in Malachite livery with the legend BRITISH RAILWAYS on the tender, 34081 cabside, both centred between the middle and lower lining, and the number forward above the buffer bar, space was left in the lining for eventual naming. My avatar is of 34011 taken by my father in 1949 with the up Devon Belle east of Okehampton.

Hope that helps, it will be interesting to see your photo of 34081.

Hi John,
Many thanks for putting me right

It's good to know it isn't just somebody's "wish" livery!

I'm so glad someone found 34081 with a picture in her guise as she is to come out now.... I've spent ages searching for something to show Ged as I didn't come up trumps! Very annoying when you have seen her carrying her number as she is now.

Can't wait to see the photo. 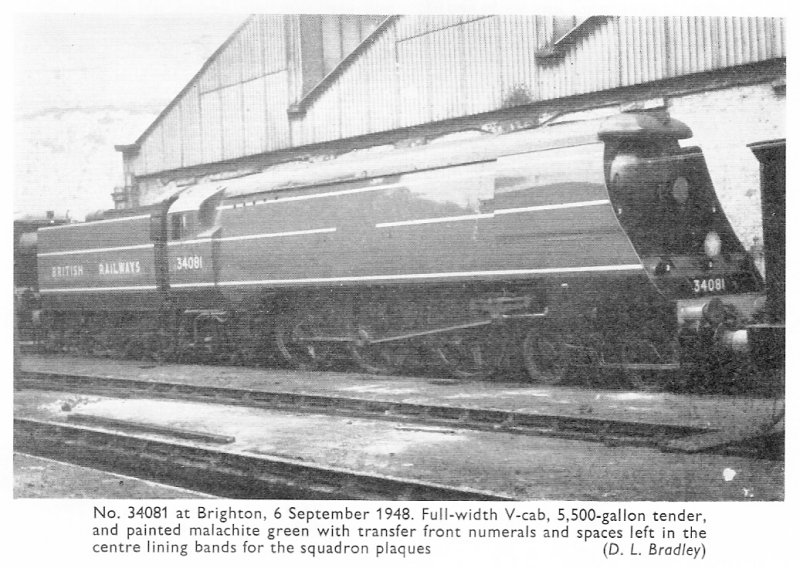 The locomotive did not receive the dark green livery until April 1950, was not rebuilt, and was withdrawn August.1964.

Many thanks for the instructions.