I have now come to the point where I can release my Route Building Roadmap - this shows existing routes and those in the planned pipeline.

The roadmap will be updated as and when any route is released.

The FINAL LYR Heartland - 1920 - V5 is now available for download from UKTS.

MAINTAINING SEPARATION BETWEEN MY 1920 ROUTES AND MY LMS 1930'S ROUTES

You will see from my BBS Route Building Roadmap above, I build my routes in 'pairs', one for the Pre-group era set around 1920, and a modified version suitable for the LMS 1930's era. The routes themselves are suitable for both MSTS and Open rails, and can co-exist together quite happily.

Bearing in mind MSTS has not been available for over a decade, the 'successor' Open Rails makes it easy to create separate installations for specific railway companies or railway countries. The diagram below shows how I setup my train simulation installations. In addition to my emphasis on Pre-group and LMS 1930's, I also have separate installations for all my NSWGR routes and stock, as well as several self-contained payware routes, complete with their custom activities and stock sets. 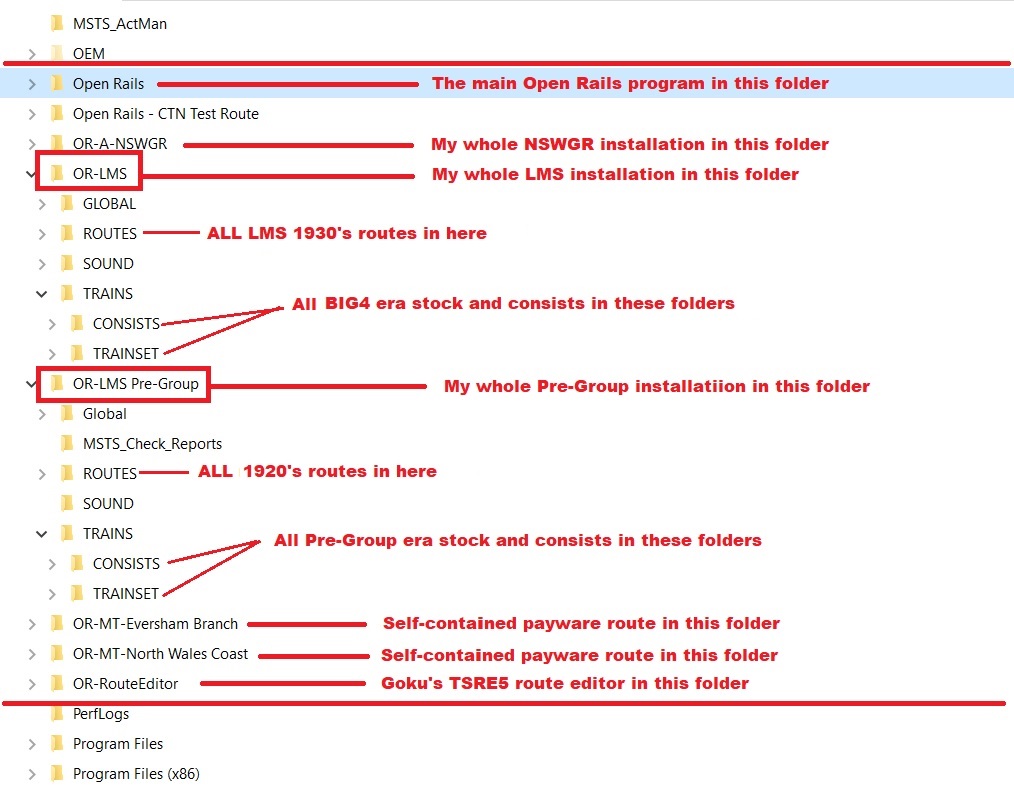 Another advantage of setting up this way, is that when converting Activities from the Pre-group versions, all Activities, Paths, Services, Traffic and (required) Consists can be copied over direct into the LMS route version - the only thing that needs to be changed is to swap the pre-grouping stock in the Consists for BIG4 era stock, keeping the (pre-group) consist name to ensure the copied activity works the same as in the pre-group version.

I hope this gives you a new insight into how you can make your Open rails train simming experience, easier and work better for you.

Hi Brian
Always good to hear from you and your method of setting up looks very good to me, and perhaps I ought to use something similar. At the moment I still make use of Mini Routes albeit infrequently which often brings up the "out of date" message!
I trust that you are in reasonable health and that over in Australia Covid is not proving too much of a proverbial pain in the lower area!
Take care and all the best, Alec

It should be available in time for Christmas download. Enjoy

The unannounced route should be identified on New Years Day !

Way back in 2011/2012 I was quietly working with Don Hinton on a new route. It was based on a MR/NSR area, and I built a whole set of custom MR/LMS loco facilities for that route (bearing in mind Don set his routes in the 50's/60's), including many different loco sheds, coal stages, ash plants, water towers etc. Things were going nicely, until Don had a major PC crash when his PC and hard drive failed. As a replacement Don decided on a laptop rather than a desktop, but unfortunately, the in-built video card combined with Win 8, he was unable to install and run MSTS. He reluctantly made the decision to withdraw from the MSTS train simming community - I was offered the route to finish off, but as I was heavily committed to other things at the time, had to decline.

A couple of months ago, I was clearing out some old stuff and came upon a CD dated April 2012, which had a Work in Progress copy of the route in question. I installed it and decided it was too good to lose, so contacted Don and got his permission to finish off the route.

So, I now announce Stoke-Nottingham 1920 - it could have also been called Burton-Derby V3, but Don decided on a new name 'Stoke-Nottingham', to better reflect the new extremities of the route, and the new emphasis on the exNSR lines. I append a track diagram showing the extent of this route - unfortunately, Don had laid track all the way from Stoke to Macclesfield before the crash, but this work was lost. Essentially the new route was Burton-Derby extended at the NSR end. The April 2012 part route had track laid from the end of BD2 from Leigh up to Stoke (and just past Etruria and Hanley) as well as the Churnet Valley line from Oakamoor to Rushton, along with the Stoke-Leek cross-country line. Scenery was finished from Leigh to Meir, but the rest was just track on bare ground.

Once I surveyed the route, I made the decision that as Bob Pegg's Potteries Loop Line Route more than adequately covered the Stoke to Macclesfield and Potteries Loop Line, it was not worth the effort to duplicate this section. However, I extended from Rushton to North Rode (with a bit of the NSR Stoke-Macclesfield main line for completion), so we have the full Churnet Valley line from Uttoxeter to North Rode, and also added the Biddulph Valley branch from the existing stub at Milton Junction through to Biddulph (the section from Biddulph to Congleton Lower Junction was not interesting enough to attempt). The Biddulph Valley is important traffic-wise as there are several large collieries as well as the two largest Ironworks in Staffordshire (Robert Heath's Black Bull and Ford Green ironworks combined produced the most bar iron in the World).

Work on this route is progressing nicely, and I'll have further updates, as and when ready. 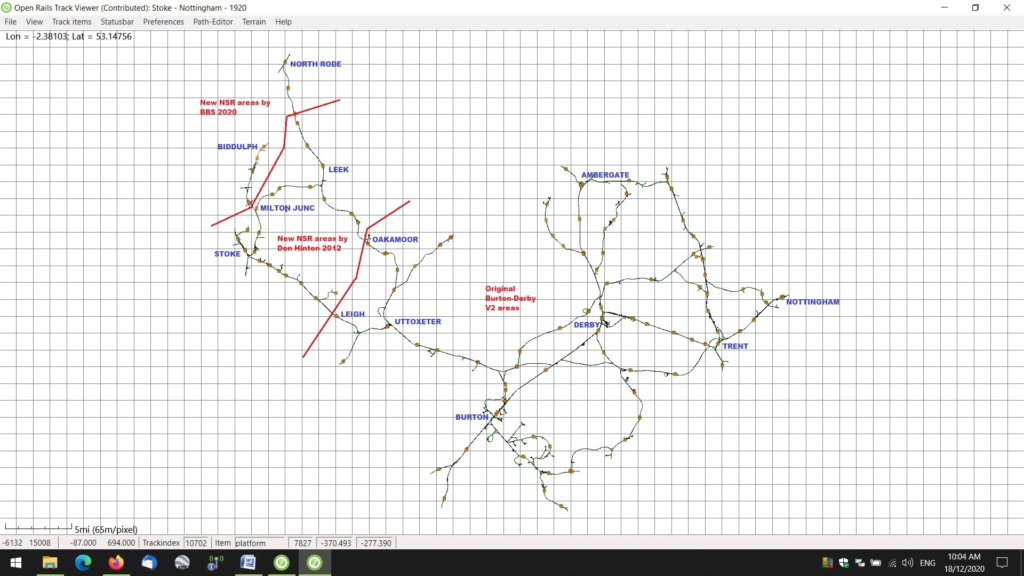 You have prompted me to revisit the Burton-Derby route, and I have been enjoying exploring some of the byways such as the Wirksworth branch, the line through Denby and the branch from Stanton Gate - though it is incomplete. They are delightful with lots of interesting industries.
But I realised that some of the lines on the 1923 map are not included, possibly because they had closed by the 1950s in which the route is set (eg that from a junction south of Ripley to the Pye Bridge line south of Langley Mill). But equally my maps for 1922 have no sign of the Trent complex.
I don't know if this applies to any of the ex-NSR lines, but presumably there will need to be quite a difference between the current 1950s version and a 1920s version. I am thinking for example of the Cheadle branch from Cresswell and the Caldon Low branch. The NSR is not my scene so I don't know when they went - or were they just omitted by Don Hilton? There also seem to be some links between lines which were not present in 1923, such as a south to west junction between the MR branch from Stanton Gate and the GNR line near Ilkeston - though perhaps Don put that in rather than the end of the branch to give more operating potential.
There are also a lot of short branches (a few hundred yards) which would have led to collieries etc. I don't know the dates when these were operating.
Mind you whatever, I am still looking forward to seeing the new versions.
And thanks for the recent stock packs.
Jonathan

The Stoke-Nottingham 1920 route is now available for download on UKTS.