Many thanks for the new route. It looks great - and I have already spotted the extension to Penistone, for which even more thanks.
In installing it I have followed my usual practice. First I made a copy of my "LMS and BR LMR routes" MSTS installation. Then I copied the new route into this.
But when I then try to select the route the screen freezes and MSTS crashes.
So I removed all the other routes. Huddersfield & Environs LMS now works fine once I had sorted out a suitable Consist - to be honest i just used Activity Editor to select a different loco.
The route runs smoothly and looks good.
Next I put back one of the routes which was originally in the folder - Burton-Derby.
The same problem. If I try to select Huddersfield & Environs MSTS crashes though if I select an activity in Burton-Derby there is no problem.
So I deleted Burton-Derby and replaced it by Thames-Mersey semaphore period
Now I can select the activity in Huddersfield & Environs but if I try to select the Thames-Mersey route MSTS crashes. Note that the difference now is that Huddersfield is first in the list of routes rather than second and therefore does not need to be selected.
So basically, the Huddersfield route is freezing the route selection window.
Now one solution is to run the route as a stand-alone but that will mean even more of my hard disk occupied by duplicate MSTS files and even more maintenance when I get a new piece of stock which will be needed for Huddersfield and other LMS routes, which I would prefer to avoid.
Any thoughts?
Jonathan
PS I have not investigated the route in Open Rails, though I know that one day soon I shall have to make the switch.

Basically, I have TWO separate train simulator installations on my PC - one is for MSTS and one for ORTS.

The MSTS version has ALL the LMS area routes, Huddersfield, Black Country, Burton-Derby, Thames-Mersey and Thames-Trent all installed using a 'common' LMS Trainset, and then a similar installation for the ORTS setup. All works perfectly with no lock-ups.

Maybe the problem is that you have changed the stock for the 'default' activity and that is causing the problem - that is the only thing I can see that might cause it to lockup. Make sure you have the 'correct' loco and consist and try running it again.  I do extensive testing (as well as a few friends doing casual testing - not officially Beta testers, but have had no complaints from them) and check to make sure no problems arise before I release the route.

I've been building and releasing routes for well over 12 years now, mostly NSWGR, before I started on my LMS / LMS pre-grouping stuff, and have never had any route lockup or reported as lockup before.

I have NOT been able to replicate your problem - other than that, I have no other answers - everything works perfectly OK in either installation for me.

Is the problem caused by the fact that the consist for the default activity is not actually included? (At least I couldn't find it anywhere and had to create it myself.)

Forget that. I see you created a consist.

The Consist in question is automatically installed with the LMS CD / LMS Stock Pack downloads, and is NOT included with the route.

I have the set of files for the LMS stock pack downloaded but had never installed them (I seem to have plenty of LMS stock without!). I shall now do so, go back to the original consist and try again. I'll report back either way.
Jonathan

There was unfortunately an error in the .trk file in the turntable patch I have uploaded. I do not know whether this is what caused the problem. I have uploaded a corrected version.

I hadn't installed the turntable patch as I have not yet switched to Open Rails.
But I have now installed the relevant files from the LMS stock pack and re-instated the original version of the activity The activity runs fine.
But when i try to have more than one route in the routes list the program still freezes up and crashes when I click on one of the routes in the list.
So I will run this as a free-standing route until a solution is found.
By the way I am running MSTS under Windows 10.
Jonathan

Hi Jonathan,
What is this "other" route?
Have you installed all its required add-ons? (UKFS, New Roads, etc.).

As I reported earlier in the LYR Heartland topic, I have been working on the FINAL version of Huddersfield and Environs 1920. 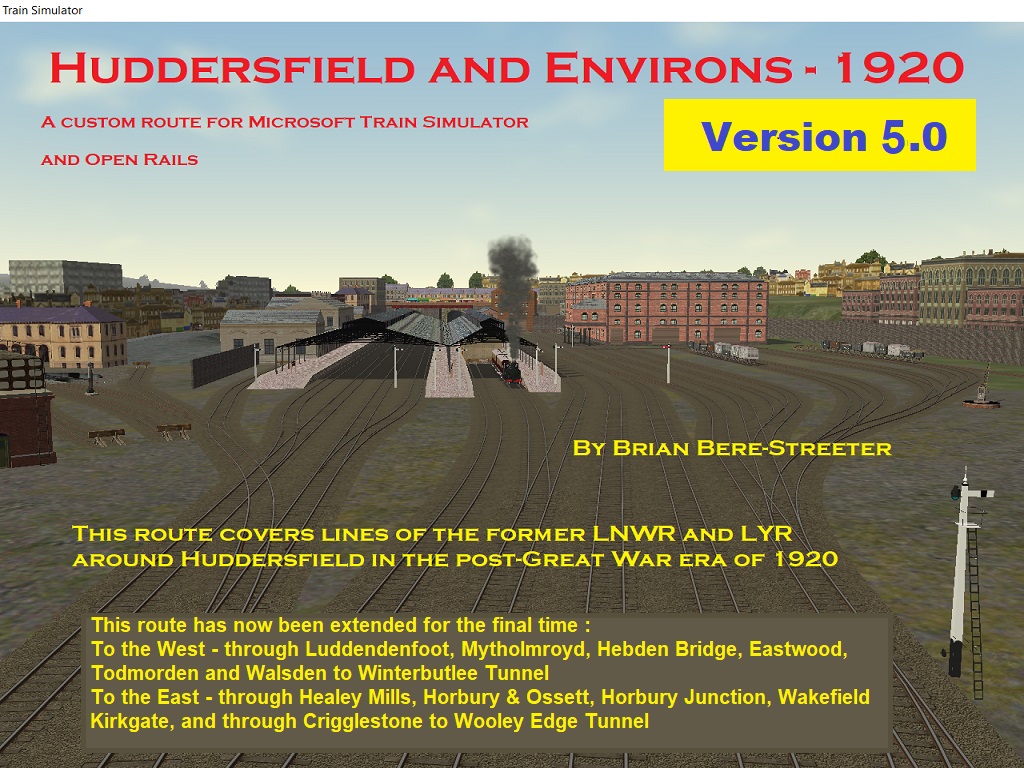 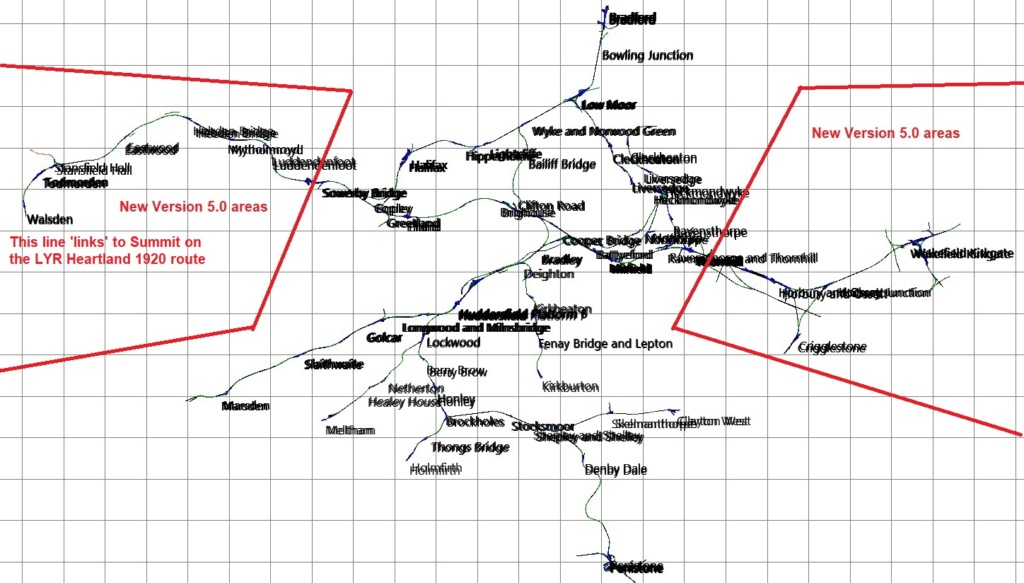 I'm looking forward to this as the extension to Walsden brings it nearer to where I live.

I trust that you are making good progress in the health area.

Take care of yourself and the family and stay safe.

I had intended it to be released before the end of May -
but I've just come out of another two weeks in hospital (5th time since last Nov).

So, I'm running late, but still hope to have it out before the end of June.

Once the FINAL Hudds route is out, I'll have some exciting news for the LYR Heartland route !!!

Sorry to hear that you have an unfortunate relationship with hospitals. Please take care and stay safe. Look forward to any of your route work being released.

This is not the time to be in hospital, for anything!

At long last the FINAL version of Huddersfield and Environs 1920 is released on UKTS.

When I first started Huddersfield the 'bookends' of the LYR Yorkshire main line was Sowerby Bridge and Thornhill - LYR Heartland wasn't even on my radar at that stage. So, Once Heartland was done, the glaring gap was between Sowerby Bridge to the Summit tunnels system.

This final version of Huddersfield enables one to run from near Normanton and from Bradford right through to Manchester Victoria - start your train near Normanton or at Bradford, run up the Calder valley to Winterbuttlee Tunnel, stop, close the route, then open Heartland and resume your train to Manchester. Or, of course, vice versa.

So, this closes a Chapter of my route building - when I announced this upgrade, I said I had TWO announcements to make - this route expansion.

Now I can release the SECOND announcement - however, you will have to go to the LYR Heartland topic to see what that is !!!

It's been a couple of months since the last announcement.

Expansion of exMR Newtown goods, in 1923, and addition of Red Doles junction has NOT been attempted due to maximum object count on that Tile for reliable operation.

In Huddersfield LMS 1930's era Version 1, I had added mechanical coal plants, and revised trackwork, at Hillhouse and Low Moor - as these were not built until after 1935, I decided NOT to include them in this version of the route.

LMS colour-light Speed Signalling between Heaton Lodge Junction and Thornhill -has NOT been attempted, for two reasons A) no LMS speed signalling models available for MSTS/OR and the required signal scripting to make it work would be nearly impossible, B) the only signalling diagram I have of the Speed Signalling is dated 1958, and the track layout is VERY DIFFERENT from the 1930-5 track layout.

This update is well underway and should be released within the next few weeks.

The Huddersfield and Environs LMS 1930's route Version 2.0 has been uploaded to UKTS, and is awaiting approval. It should be available for download within the next day or two. This route supersedes the original Version 1.0 route, which is still available on UKTS for those that prefer a smaller route.

I have included five 'basic' passenger activities which cover most of the route main lines, especially the new lines - these passenger consists use Darwin Smith's excellent new LMS 'Carriages for Huddersfield' pack (an absolutely epic set of 468 new carriages, not only for exLYR, exLNWR, exMR, some exCGR, exGNR, exNER, as well as LMS, LNER and a few GWR and SR stock and a few Pullmans - all carriages that were seen in different parts of this route), well worth the large download.