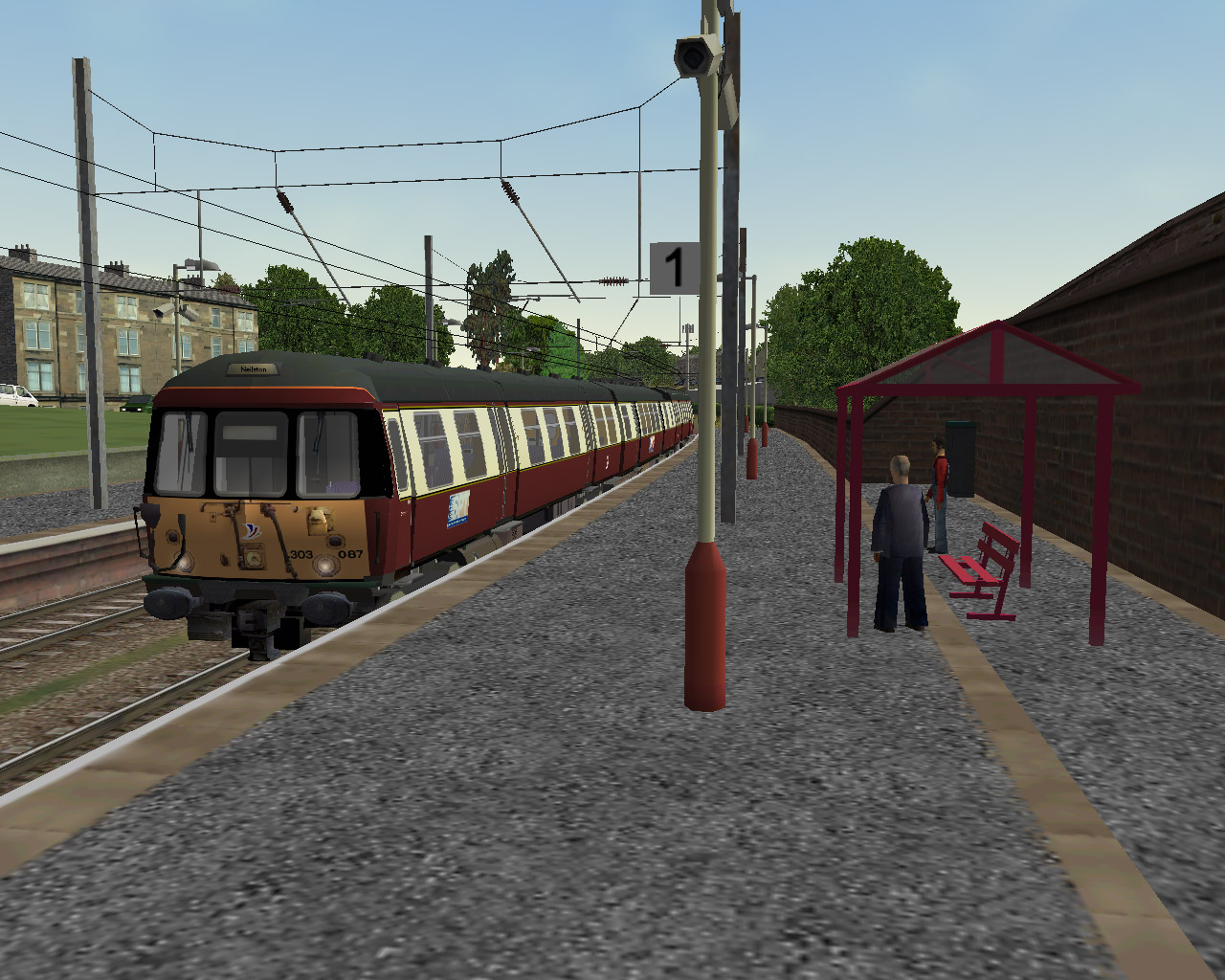 Hi all. Breaking radio silence to show that the Carmine 303s have not been forgotten. Still need coach numbers and logos tweaked, but it's getting there.

Until the next time,

Hi Niall
Those 303's look really good, I think the Carmine Cream Livery was one of the best liveries carried on the Scottish multiple units
Mike

I'm afraid there's a problem with mapping on the carmine/cream 303s that can not be overcome.

While I've been sidelined, I've been playing with textures for the 303. On the real-life 303s, the carmine section ends between the driver's door and the black cab wraparound. 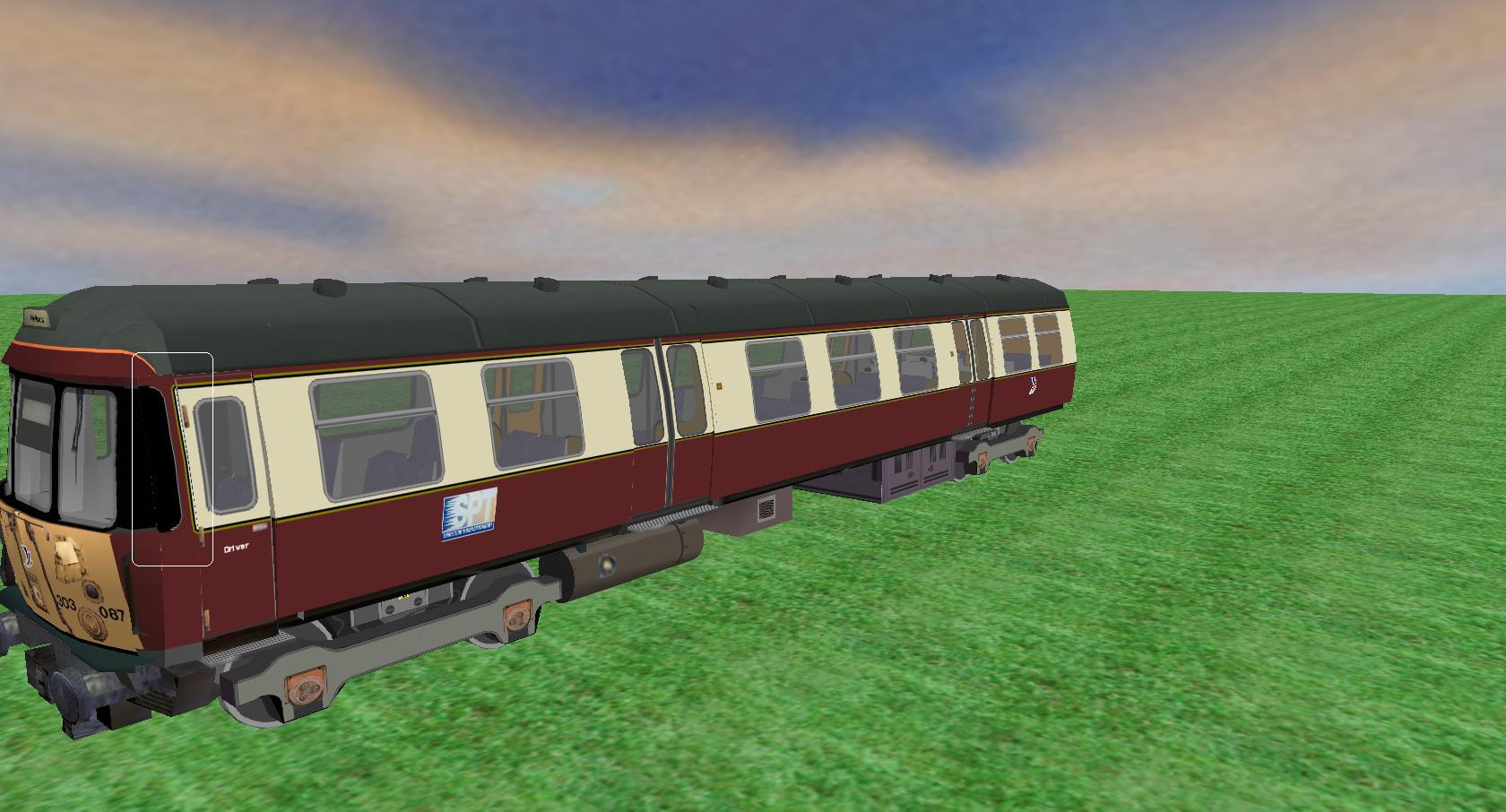 Now, while I can get this to work on one side as seen above, a problem with the mapping means it won't appear on other side (same texture is used). 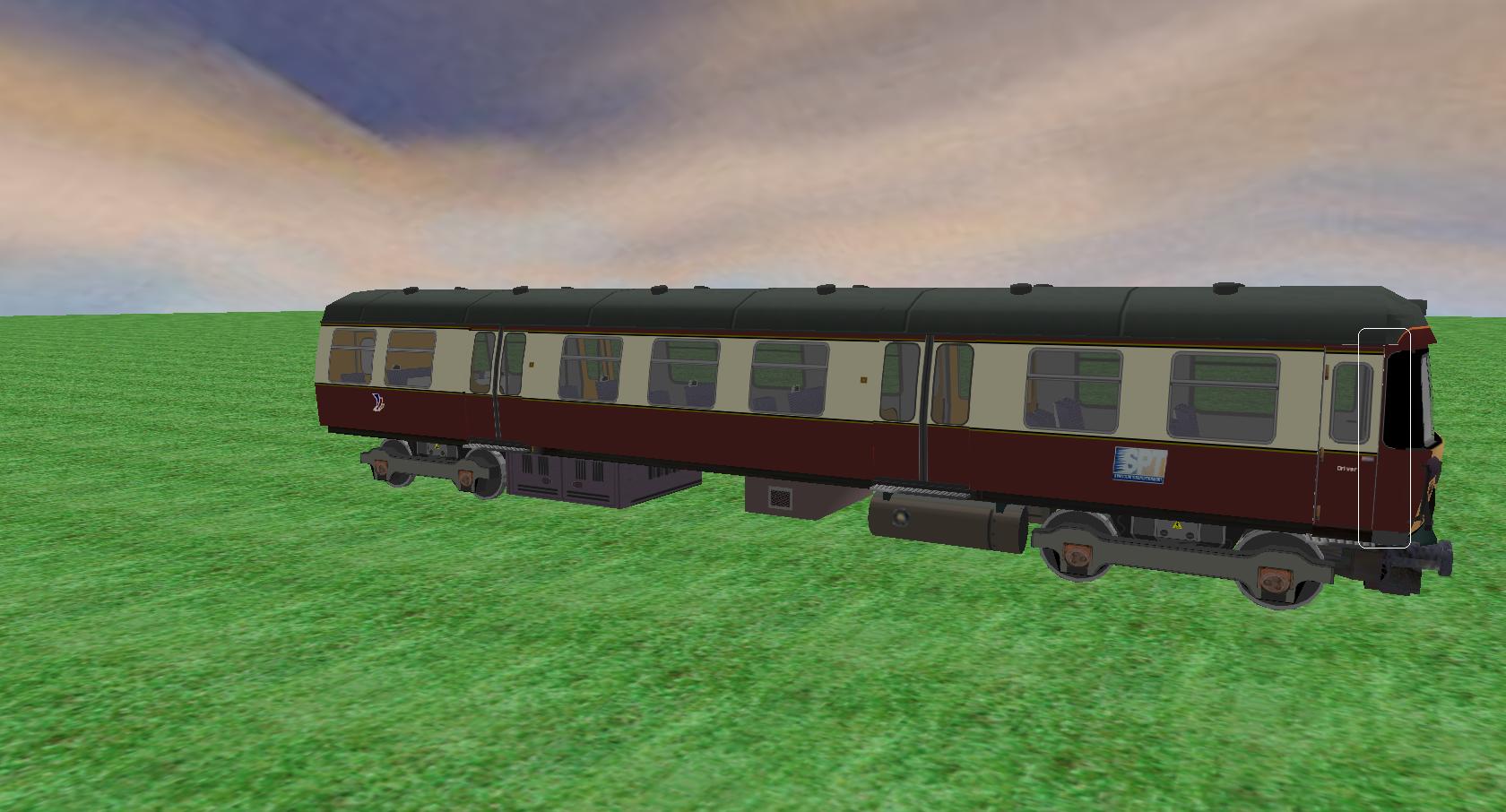 (if you can't see cab in this pic, click on "view image")

My other option was to end the carmine section on the door, but this won't work either due to mapping. One side it'll be correct, but on the other side it'll be out of position -- again the same texture is used on both sides.

Therefore, the only thing to do is have the carmine section just end suddenly as you see in the second picture. I'm sure most people won't mind and just want to see the livery in MSTS, but this is to explain that in the case of this livery it'll be impossible to get it spot on.

Once I've done this on the other side, all that needs to be done is add the coach numbers and clone the units to provide examples of the other units that received this livery.

There's no plans to release them though until a problem with the new cab is solved.

Niall
You are highlighting something that has I have noticed and that has interested me whilst I've been doing my FG DMU repaints. Namely the different ways that modellers project their textures/skins onto their base model, as well as their use or otherwise of the infamous alpha channel!
I have no solution other than confirming my own premis that train simulation requires a reasonable degree of compromise, although the abilities of such as yourself has reduced the need for that compromise.
Alec

It's frustrating, Alec, but that's just the way it is. I'm just grateful we have a 303/311 model in the sim (I'm shocked it's not in the other sim yet). It wasn't a problem on previous versions as the centre stripe always finished before the driver's door and thus could be done accurately. It's only on this livery it's a problem.

Still, it'll be good to see them finally done. When it comes to finishing the route, I want to have a 303 as the loading screen again and it makes sense to use a Carmine-Cream unit. 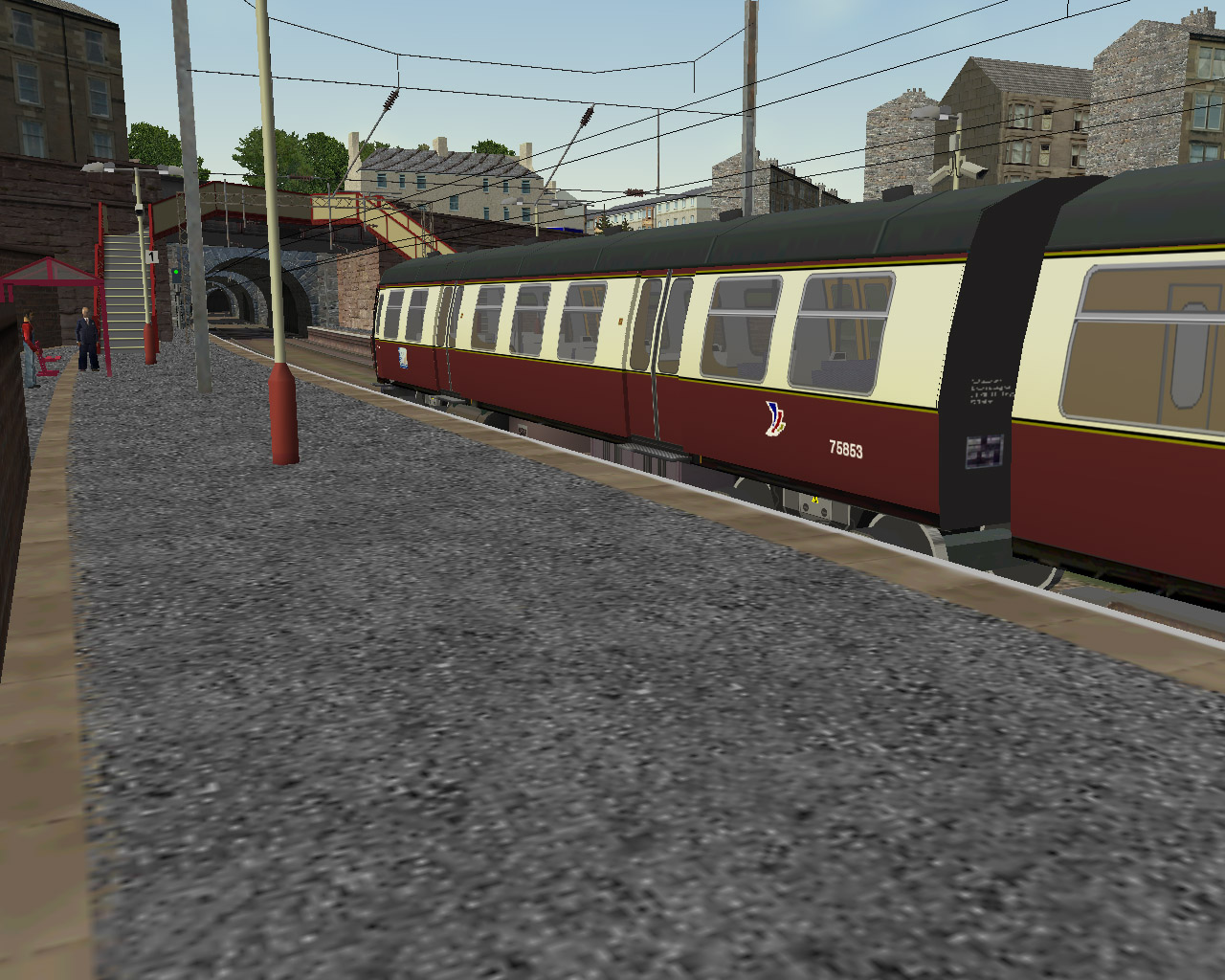 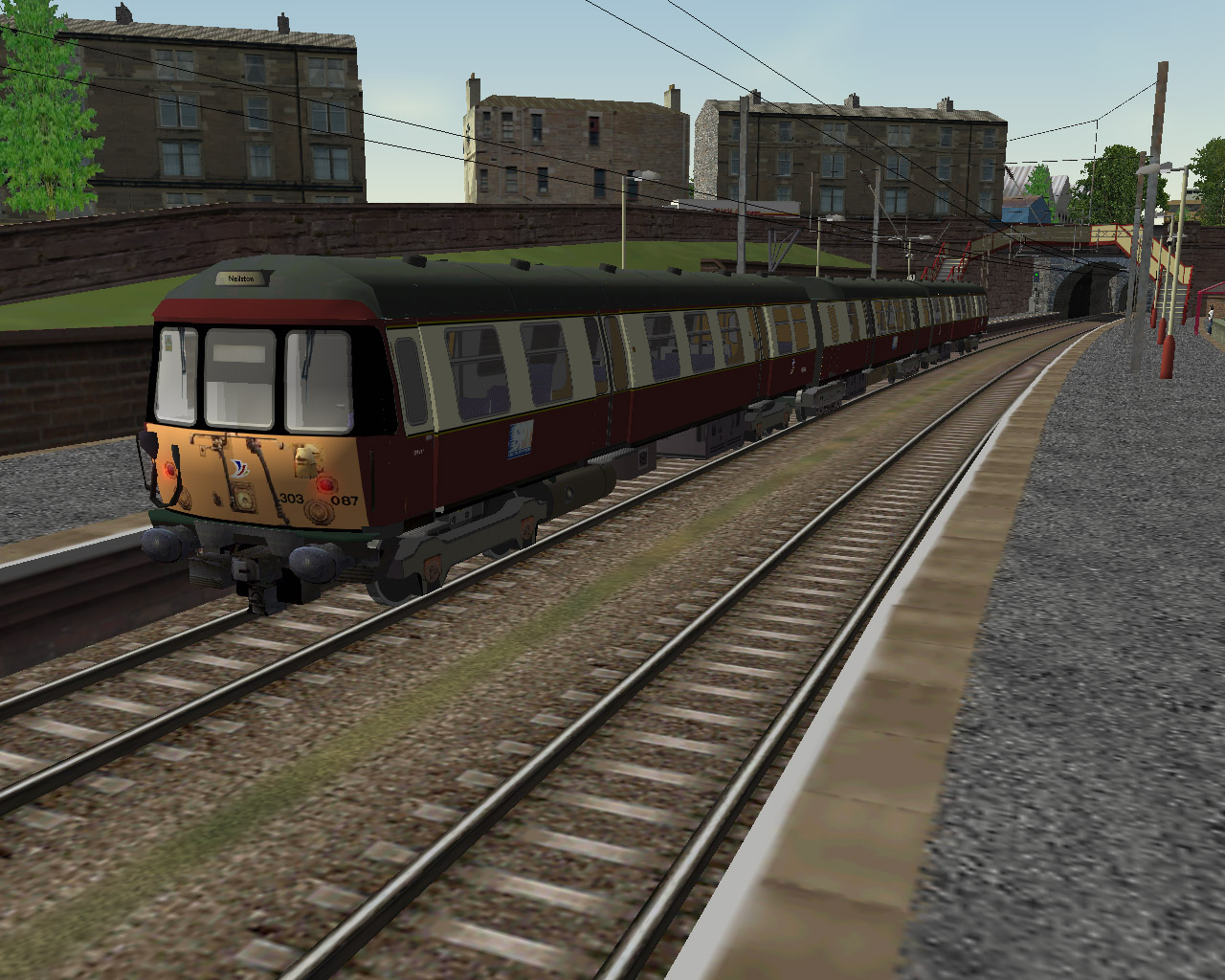 One of the reasons this unit was never released with the others was down to mapping issues. Alas some can not be overcome, but I've done what I can.

All that remains is to re-work the alpha channels (due to some windows being moved), clone the units and then send out for testing.

Would be lovely if I could include with my June uploads, but no promises!

As I've said before June MSTS can extend into July!

All good things are worth waiting for.

If I can't release them next month, I'll probably hold on to them until the route is ready as once I get back to working on it, everything else takes a back seat.

Ever have one of those days when you spend far too long working on something? I did today! 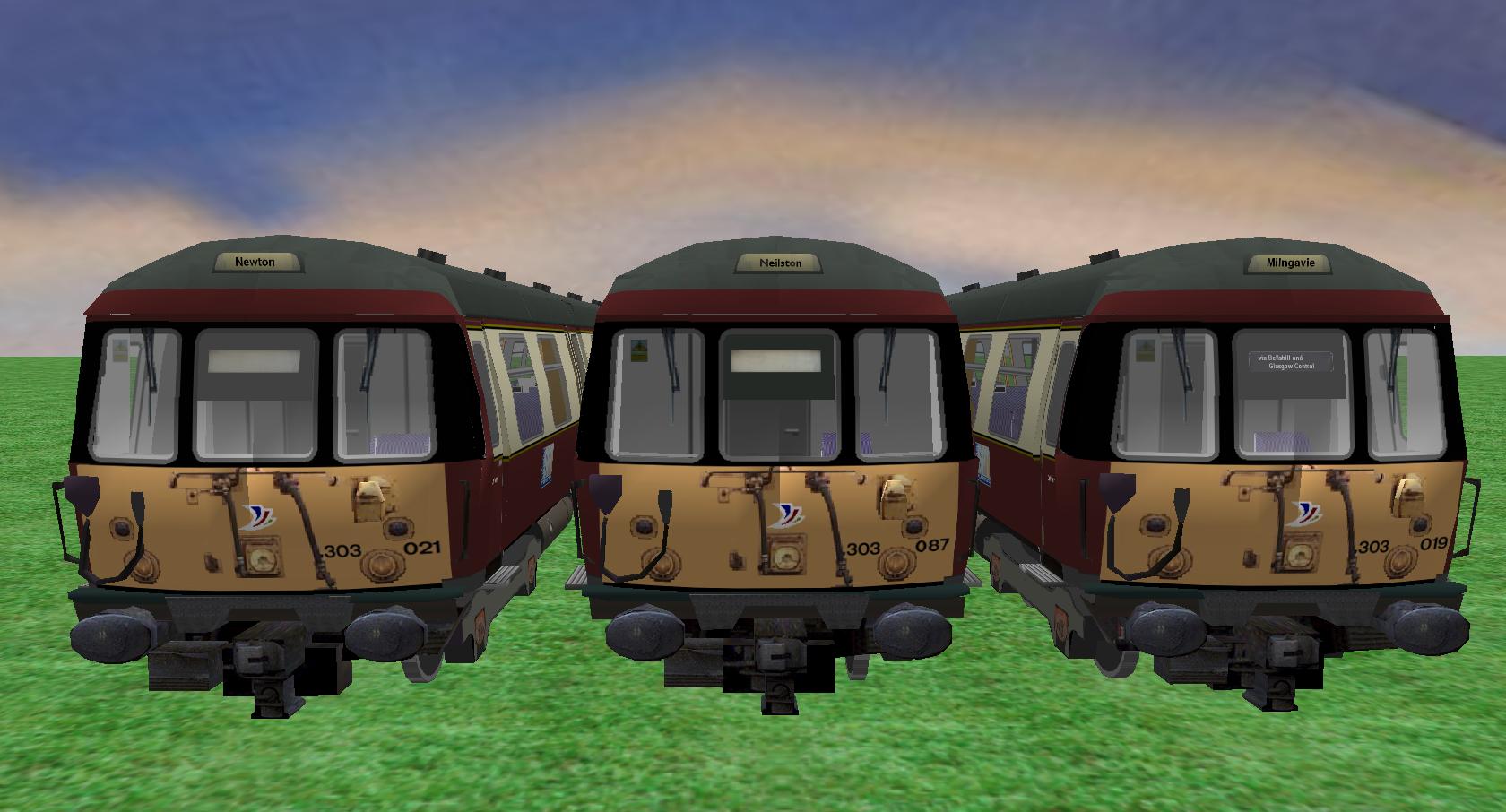 Having spent all afternoon and evening working on the re-skins, am now just beginning the cloning stage. The pic is a slight cheat as I've only re-skinned the ace file for the front of each unit! Still need to do some more changes and plenty of file renaming. Plus there's still a fourth unit to do.

Won't have any more time until next week when I hope to finish off the cloning and send the units out for testing. 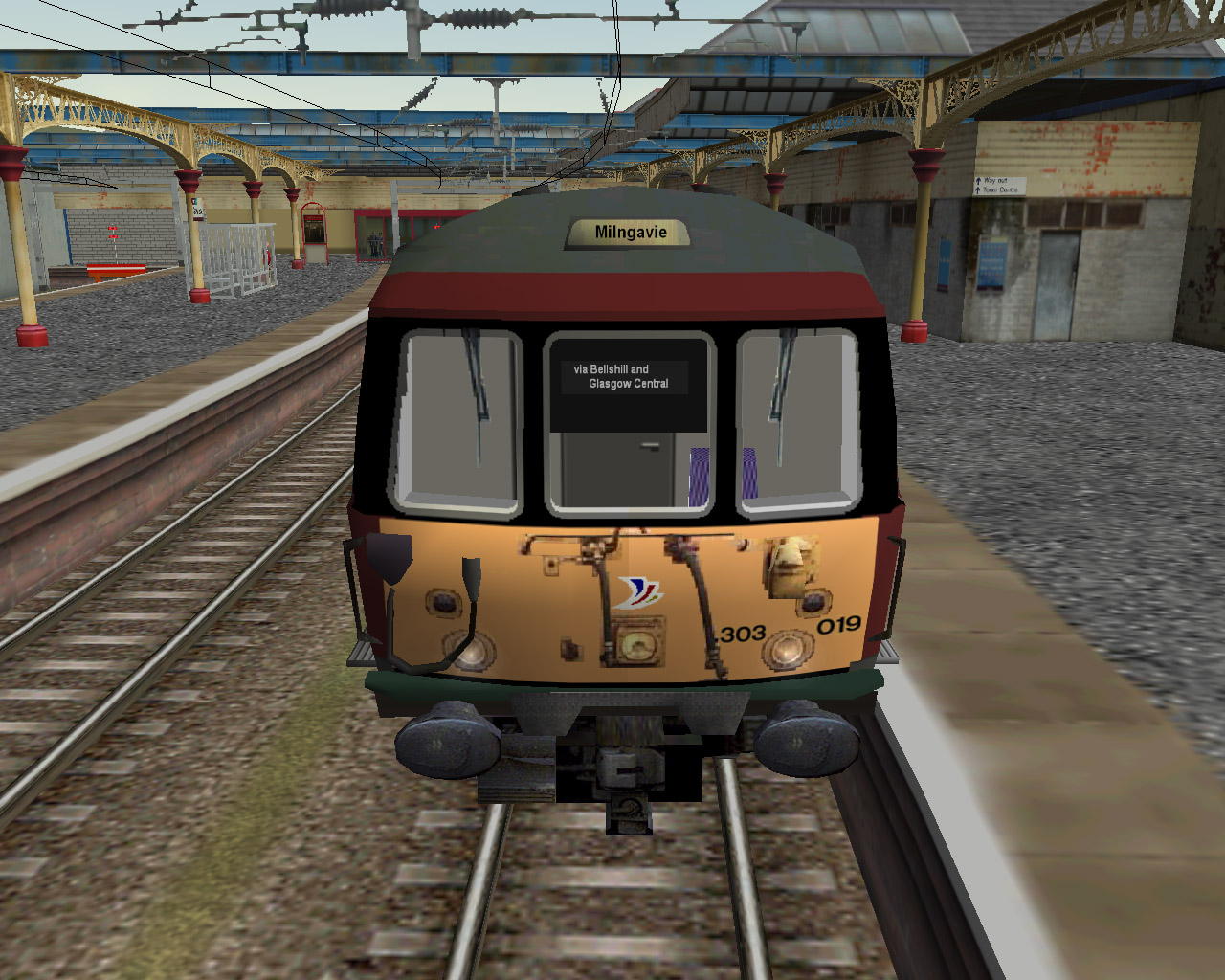 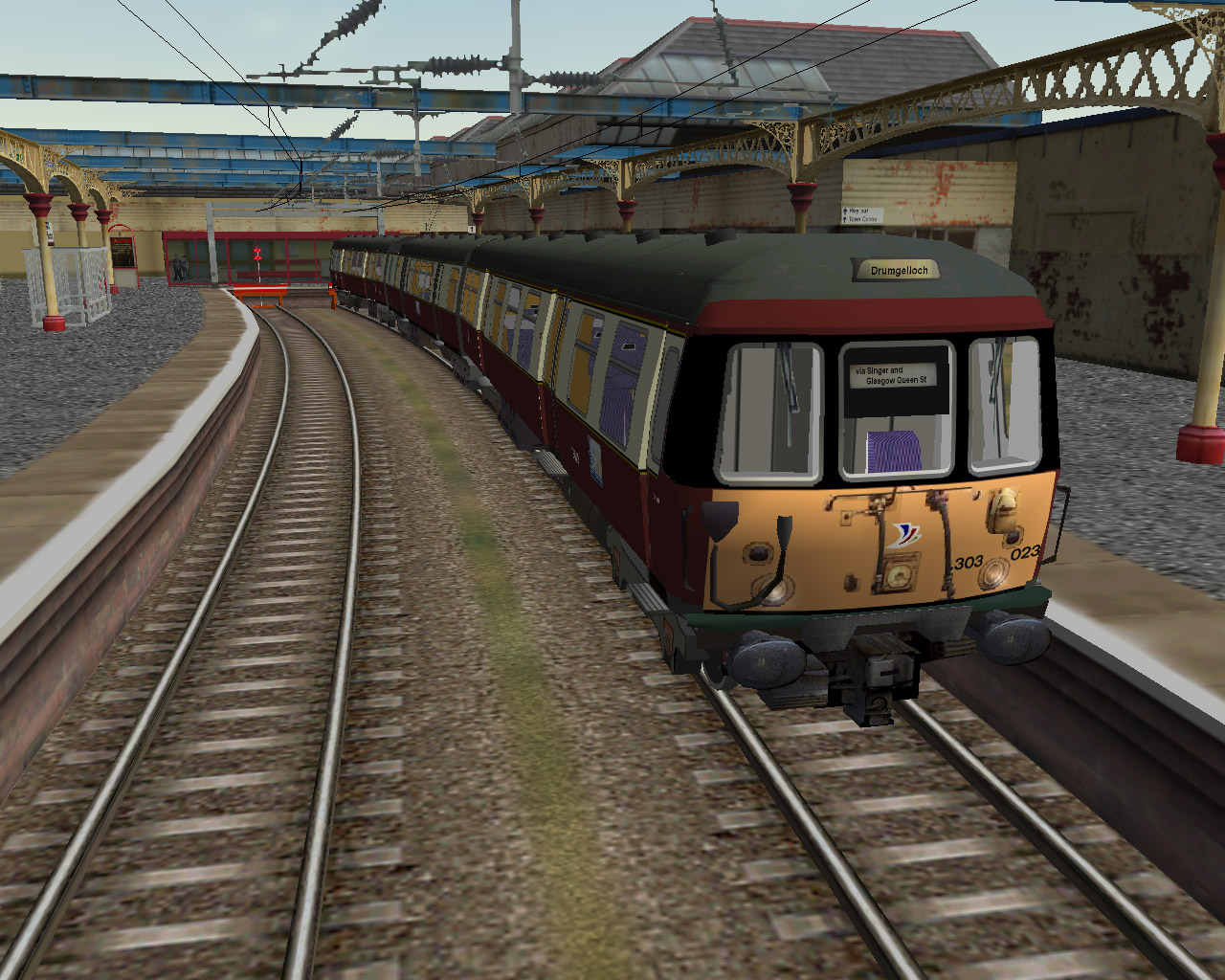 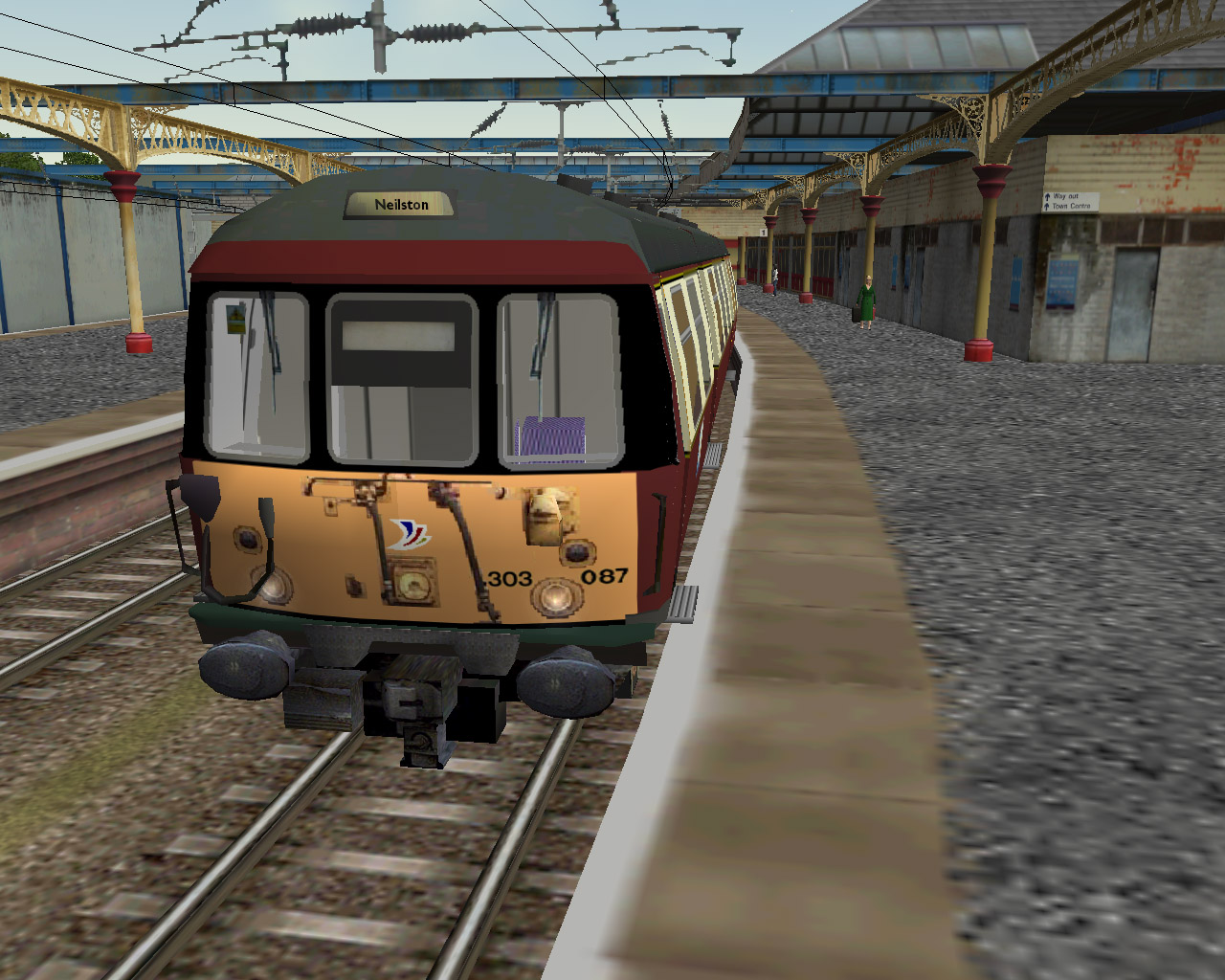 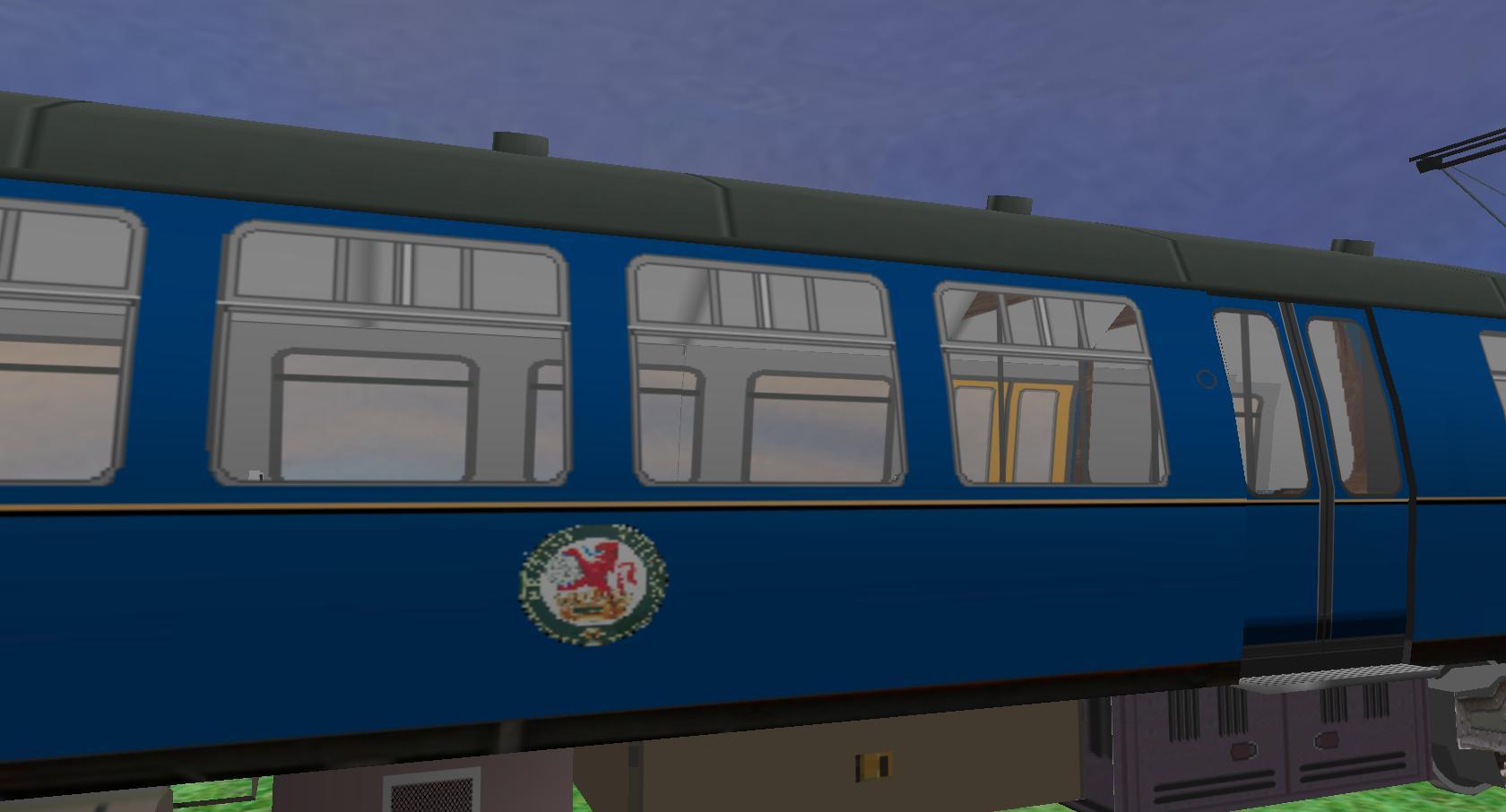 While I wait to hear back about the Carmine/Cream units, I'm doing a little work on the orginal Blue Trains.

Does anyone have a better version of this logo please? I assume it's some early 60s British Rail logo. When the units came out, this logo was on the MBSO.

Hi Niall,
This looks the same as the Emblem I am using on my Hastings DEMU set. Would you like me to send it to you?
Thanks
Andy

Yes please! I've PM'ed my email to you. 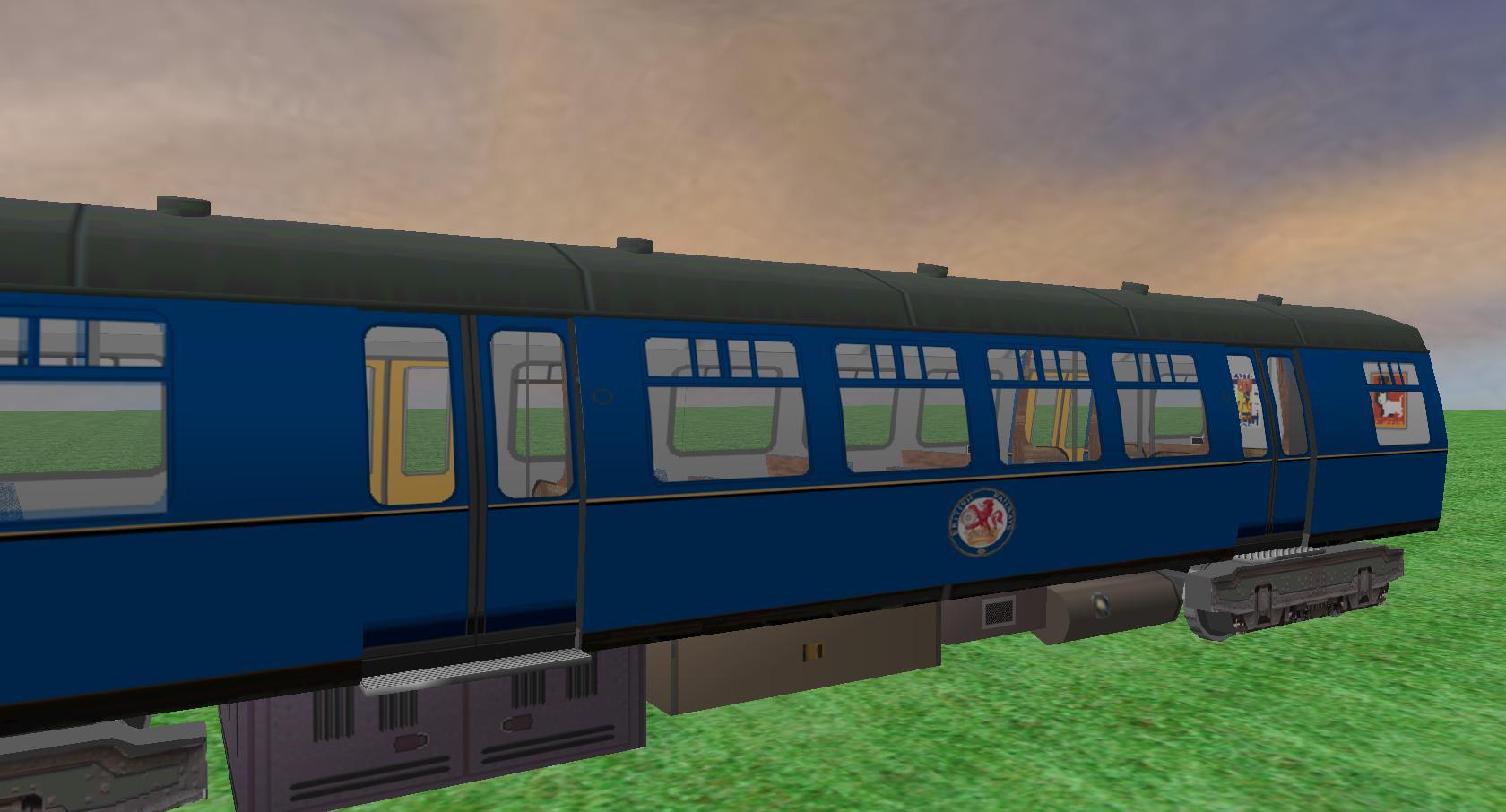 A picture I found on my hard-drive (I also have the unit safe as well!) of the centre coach from the original units. I'd like to thank Andy for the logo.

Hopefully be able to get back to working on this unit soon. I can tell from the pic I still have to finish off some windows and alphas, plus maybe re-work the insides. I believe the driving coach was complete bar the windows which needed replacing.